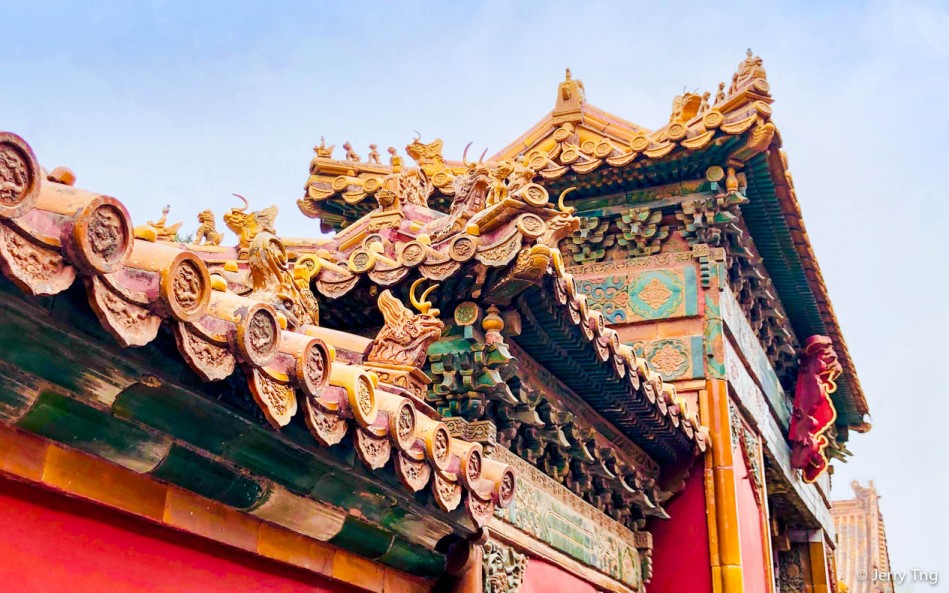 When you visit the Forbidden City in Beijing, observe the number of animals that are protecting the place.

According to an ancient classification the dragon is considered the chief of all scaled creatures, while birds are represented by the phoenix; animals by the unicorn and all shelled creatures by the tortoise. It is second only to humans in the hierarchy of animals.

Dragons in China are not the fire-breathing, evil monsters that they are portrayed elsewhere in the world. May be a different word should have been used to distinguish the Chinese version of these mythological creatures. The Chinese dragon is imperious, powerful but good-natured. People need to seek the favour of dragons and keep them on their side. 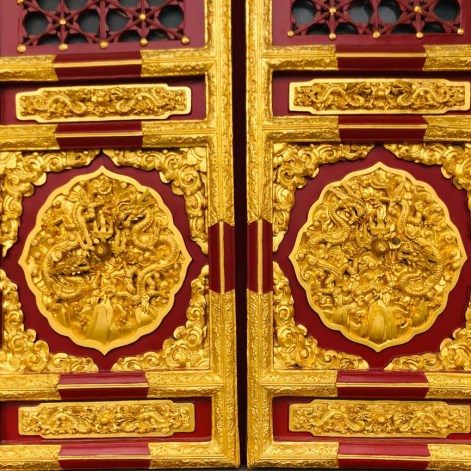 The emperor was also represented as the dragon, being the supreme ruler of the land. The symbol of the dragon can be seen everywhere the emperor went, from the palace doors, the ceilings, on decorations on the wall, even the stairs that the emperor used.

It is a strong ‘yang’ animal (male; sun; light). As such it associated with the number nine (3 is ‘yang’ so 3×3 is very ‘yang’) and so Nine Dragons 九龍 are extremely propitious. Kowloon, part of Hong Kong means ‘nine dragons’ in Cantonese. There is an impressive imperial nine dragon wall of glazed tiles at both the Summer Palace and the Forbidden City at Beijing.

The Chinese phoenix, also called “Feng Huang”, is the head of all birds. Feng is male and Huang female, while paired with dragon it is female. Feng Huang has rare appearance, with colorful plumage. Many legends tell that it has a body of pheasant, while feathers like that of peacocks, with wings of roc.

Chinese phoenix is also an immortal bird whose rare appearances signify the peace and prosperity, especially a new ruler ascent to the throne. It never old or dies, belongs to the fire in Five Elements. It is said that phoenix nirvana and rebirth out of ash, symbolize the constant striving spirit.

Images of ancient birds have appeared in China for 7,000 years, with the earliest historic piece with phoenix was a silk painting discovered in a tomb of the warring states period.

A dragon turtle is a legendary Chinese turtle with a dragon-like head. It combines two of the four celestial animals of Chinese mythology. Dragon symbolizes success, courage, determination, and power. Turtle symbolizes longevity and support. The transformation of the turtle to a dragon signifies impending success and good fortune in careers and business endeavours

The Qilin is a mythical creature just like the Dragon and Phoenix. The Chinese name is 麒麟 qílín which is sometimes written as ‘kilin’ or ‘kylin’. The character ‘Qi’ is a type of horse and so has the horse radical while the ‘Lin’ character is a complex character made with 23 individual strokes.

A stone qilin often guards a tomb, sometimes as one of the creatures along a Sacred Way. The best known example is on the Spirit Way to the Ming tombs in Beijing.

Although described as the ‘Chinese Unicorn’ the creature is different to the Western Unicorn, it normally has two horns but may have one or three and a deer’s body but often the sculptor has gone to town with their imagination and embellished with fish scales and an ox’s tail; it is usually portrayed in white. A qilin is the representative of all animals bearing fur (horses; cows; goats; deer etc.). It is one of the four sacred animals with the dragon, turtle and phoenix. When Zheng He’s voyages to Africa brought back a giraffe as a gift to Emperor Yongle, it was thought that it must be some sort of Qilin, the Emperor did not agree but in Japan ➚ the giraffe is given the name qilin to this day.

The creature is endowed with the ability to pick out the guilty from the innocent. It is usually portrayed as a one-horned ferocious creature. With its association with justice statues are often seen outside criminal courts. The most well-known example guards the Forbidden City in Beijing. Often confused with a qilin, but the tell-tale signs are the one-horn and the claws instead of hoofs.

There’s one that resembled a dragon, but technically it is a Xiezhi. It is in front of the Palace of the Empress Dowager. The Xiezhi was supposed to have one horn, but because the Empress Dowager was not entitled to have a dragon as guardian animal (a privilege reserved for the emperor), the official made it into a Xiezhi with features of a dragon.

Chinese or Imperial guardian lions are a traditional Chinese architectural ornament derived from Indian culture. Typically made of stone, they are also known as stone lions or shishi. They informally known in colloquial English as lion dogs or foo dogs.

The concept, which originated and became popular in Chinese Buddhism, features a pair of highly stylized lions—often one male with a ball and one female with a cub—which were thought to protect the building from harmful spiritual influences. These are Ming-era guardian lions.

A Qing-era guardian lion pair in the Forbidden City. Note the different appearance of the face and details in the decorative items, compared to the earlier Ming version. Also, as these are guarding the doors to the ladies’ quarters, these lions have downward ears to remind the concubines not to meddle in state affairs. 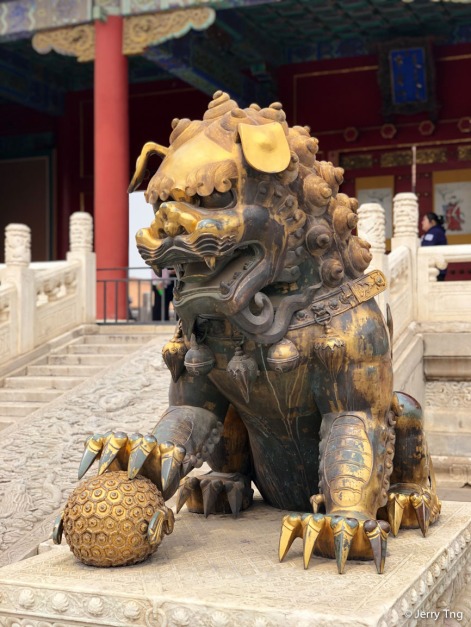 Mythical Animals on the Roof

Chinese imperial roof decorations or roof charms or roof-figures (檐獸 / 檐兽; Pinyin: yán shòu) or “walking beasts” (走獸 / 走兽; Pinyin: zǒu shòu) or “crouching beasts” (蹲獸 / 蹲兽; Pinyin: Dūn shòu) were statuettes placed along the ridge line of official buildings of the Chinese empire. Only official buildings (palaces, government buildings, and some temples) were permitted to use such roof decorations. Chinese roofs are typically of the hip roof type, with small gables, so decorations along the ridge line were highly visible to observers. Variant versions are still widespread in Chinese temples and has spread to the rest of East Asia and parts of Southeast Asia.

Along the ridges (unions between the roof panels), near the corner, a row of small figures is placed. These are often made of glazed ceramic and form an outward marching procession. Here we see the imperial yellow glaze reserved for the emperor.

At the head of the procession will be a man riding a phoenix (騎鳳仙人), one legend suggests that this represents a minion of the emperor who grew greedy for power and was hanged from the roof gable for treason. Another version of this figurine is an immortal riding a fenghuang-bird or qilin. Yet another interpretation is that this is a person serving the emperor, being watched by the following beasts.

At the tail of the procession will be an imperial dragon (龍), representing the authority of the state. In between will be mythical beasts, usually an odd number of them. The mythical beasts are set to pounce upon the man and devour him should he stray from performing his duties with faithfulness and rectitude.

The maximum number is seen at the Hall of Supreme Harmony 太和殿. Note the addition of an immortal guardian (行什, hangshi, “ranked tenth”) in front of the dragon holding to a sword like a cane. During imperial times, this figure was unique to this single building, being the throne hall and therefore the building with the highest status in the entire empire.

The numbers of creatures depend on the importance of the building and who is staying in the house. 太和殿 has 10, 乾清宮 has 9, the emperor’s quarters had 7, the empress had 6 and imperial consorts 5, and the lowest rank 1.

These examples are found within the Forbidden City, Beijing, China. Other examples can be found on functional structures such as gates and baracks of the Great Wall of China, as well as the roofs of the Summer Palace outside of Beijing.

With the fall of the empire (in 1911 C.E.) such decorations are now seen on commercial structures and tourist boats.