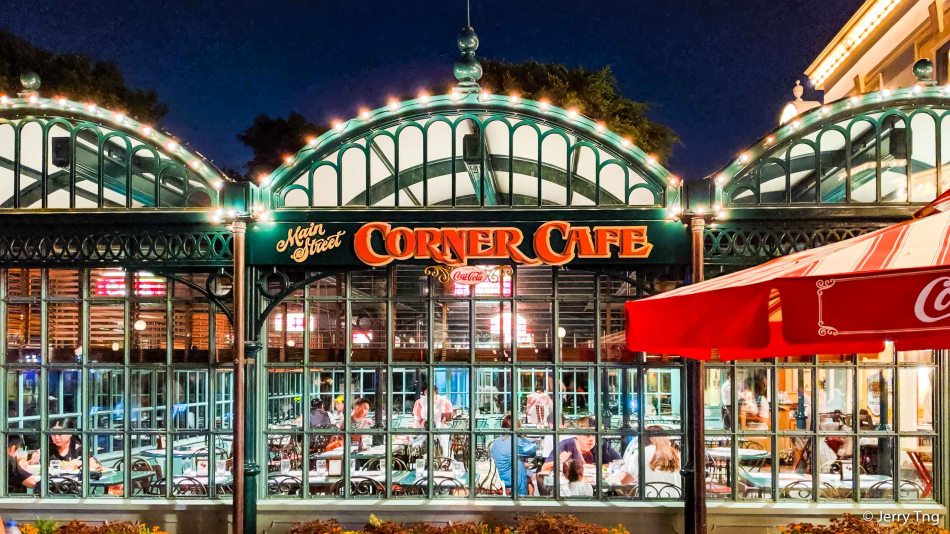 Dining in Disneyland series continue with Hong Kong Disneyland. It is the smallest Disneyland theme park in the world, but as it is the Gourmet capital of the world, one has high expectations.

There’s a Main Street USA in every Disney (except Shanghai), and at the corner of the long rows of shops is a dining option. In Hong Kong it is the sit-down American dinner, Corner Cafe.

While the facade of the building looks like the turn of the 20th century, the main dining hall is like a crystal palace. In fact, the corner sit-down restaurants in Magic Kingdom and Tokyo are called Crystal Palace and they all do look similar.

The food is American dinner food – ribs, chops, burgers, fries. And it’s Mickey overload here. You can see traces of Mickey everywhere, including the ketchup.

And instead of beef ribs, in HK they served pork ribs but with the same sour/sweet American BBQ sauce.

Sorry that I destroyed the Mickey before I took the picture. The doppel of sour cream on the mushroom soup was supposed to resemble Mickey.

Well, I can only say the food here was OK, the service is really good. But unfortunately, if you are thinking of watching the evening parade from the restaurant, you are out of luck. None of the restaurants allow you to watch the parade even though they are all strategically place along the parade line. One reason or another, you are blocked.