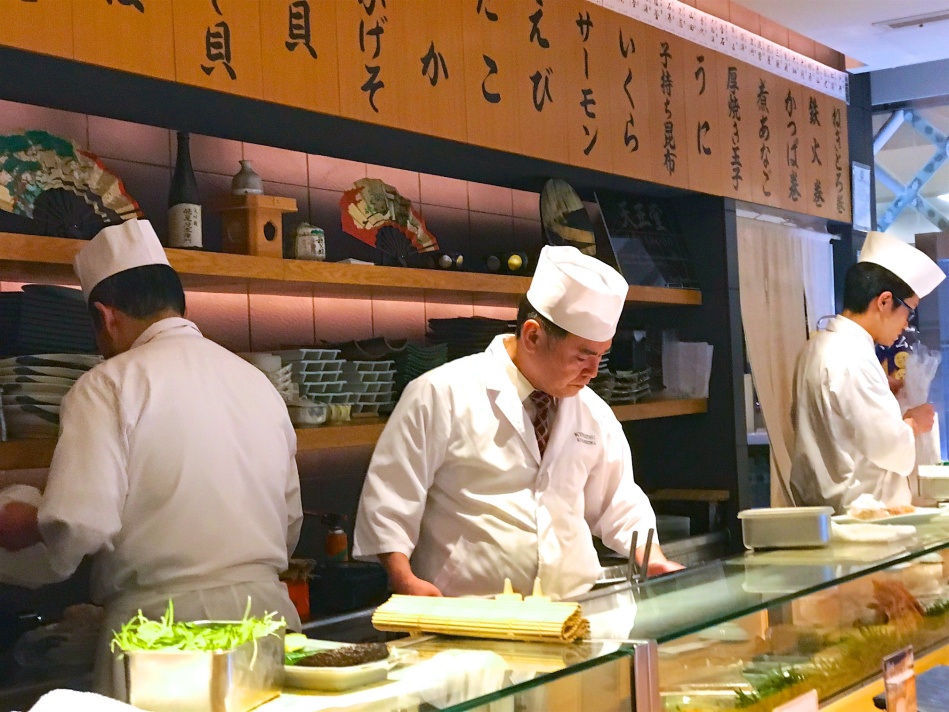 Everytime before I transit in Narita or leave Japan from Narita, there’s one stop that I would make – Sushi Kyotatsu（寿司 京辰）.

Sushi Kyotatsu stood out from its competition in the vast complex of Narita because it was the only place with freshly made Niigiri sushi. There are some other Japanese restaurants in the airport that served bentos and set meals, but the makes and sushi looked like they have been made days ago – the fish was dry and rice crumply. None of these crap in Kyotatsu.

Firstly, the fish was sourced from Tsukiji every day and delivered in the morning to the restaurant. They would cut the fish into serving pieces to save time, given that the clientele would zip and out in less than 30-45 min. Yes, you can have a proper sushi meal from the time you said, “Onegaishimasu” to “O kanjō onegaishimasu” in 30 min.

A cold beer to start the meal is a must. The glass was chilled to the right temperature and the beer was served from the tap at close to freezing temperature. Some would snort at beer with sushi, but their sake selection was just the run-of-mill stuff. You have better choices at the ANA Lounge later. And the health-conscious me order an Asahi Dream Draft – it’s like Miller Lite, but tasted better and lower alcohol content too.

I started with a trio of appetisers – fresh tuna sashimi, octopus, Ika (squid) roll with seaweed and cucumber, and a little shellfish that I do not know the name of. The tuna was lightly marinated in a konbu soy sauce that enhanced the flavour of the tuna. I always loved the way in Japan they marinate their tuna before serving.

Next came the first 9 pieces of the lunch – Tuna Tataki (Seared Tuna), Kani (king crab), Wagyu Aburi, Sawara (spanish mackerel), Hiramasa (yellowtail), Chutoro (fatty tuna), Kohada (gizzard shad), Hotate (scallop) . The quality of the seafood you can taste in every bite. The fish was firm and not slimy like those in cheap Japanese restaurants. The shari was only slightly vinegar and a bit too much mirin, which I felt was adjusted to Ang Moh tastes. 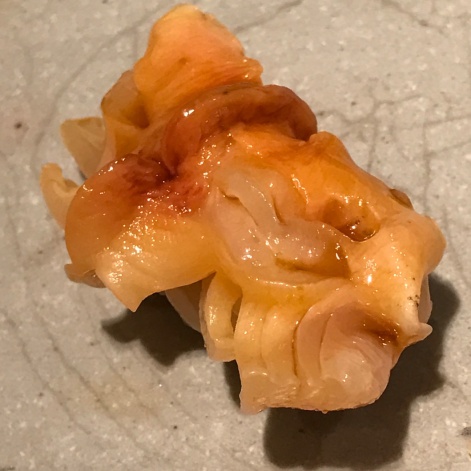 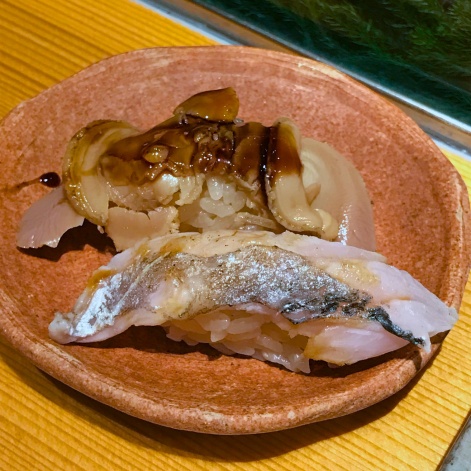 3 more pieces were served later – Akagai (blood clam), Uni Gunkan (sea urchin), Ikura Gunkan (salmon roe). Gunkan disintegrates if you do not eat them a la minute, so they were served later in the meal. You cannot pre-prep the Akagai, so it was also done a la minute. And to that I added three ala carte order – Shima-aji (snapper), Mirugai (Geoduck clam), Anago (sea eel).

And all these washed down with Hamaguri Miso.

The whole lunch came up to around USD 100, which was quite reasonable for sushi of this quality. Set meals are around USD 18 (all tuna sushi) to USD 65 (premium ingredient).

If you miss this picture on the pillar, you have moved too fare ahead from Gate 33.

They have restaurants in Tokyo (in Ebisu and other locations), but you would go to try other stuff if you have the choices. Although it was good, it was non-compete but when compared to a lot of other sushi restaurants in Ginza, I would not bother to try them. I would rate them as a Zanmai or a Itamae standard sushi restaurant.

Service was efficient, serving generous but do leave yourself at least 45 min for the meal. So if you are hungry and need your sushi and sashimi fix after a long 11 hours flight from LAX or SFO and arrive before 8.30pm (last order), this is the your truly last chance before you leave Japan.

All these effort to skip this crap you get on planes these days – this was a picture of what SQ was serving from NRT to SIN that day.