When I mentioned Kuroge Wagyu beef 黒毛和牛, what would come to mind? Cattle being massaged and fed with beer while listening to classical music. The highest quality of Japanese beef with excellent marbling and melt-in-mouth texture. Or simply a piece of meat that tasted like real fatty tuna.

OK, the last description is an exaggeration. But I personally thought that Wagyu cannot be categorised as beef. The process of raising the cattle and preparing the final product can be described as manipulation of natural ingredients. Normally, we call this process “industrial food processing 加工食品”. That’s why it tasted so good. And that’s also why you should not have too much of this as it will clog your arteries.

There are many speciality shops dealing with Wagyu, and the Wagyu course in any restaurant is not cheap. One of my favourite way to enjoy them is Shabu-Shabu. There area many shops like Kisoji and Shabugen, but among the best is Ningyocho Imahan.

Why are there two (or five) Imahans?

For those in the know, there are two Imahan that specialise in top quality Wagyu beef  sukiyaki – Ningyocho and Asakusa Imahan. Both claimed that they were the originals, and both were right.

It was originally founded by Hantaro Takaoka its two other gentlemen in 1895, when he started the first Gyumeshi (old name for sukiyaki) restaurant. In 1928, they opened Asakusa Imahan at the present address near the Asakusa Shrine by second-gen owner Koji Takaoka.

Then Asakusa Imahan Nihonbashi Branch opened in 1953 by the third-gen owner Motoichi Takaoka. Then 5 years later, the elder son took over Asakusa Imahan and the young son started Ningyocho Imahan using the Nihonbashi branch address. It has stayed separated ever since.

In fact, there are 5 Imahan that have the same roots, either from direct descendents of the Takaoka family, or associated (co-founders) that took the concept elsewhere. These included the Yoyogi Imahan which popularised the Gyutan (beef tongue) shabu-shabu, Imahan Honten along Asakusa market street (not to be confused with Asakusa Imahan) by one of the 3 founders, and Imahan Bekkan which split out from the original Imahan in 1921. Definitely will go try Imahan Bekkan as the building has been registered as a Cultural Property by the Japanese government.

There are many types of meat produced that are suitable for shabu-shabu, such as Matsuzaka beef from Mie prefecture, Yonezawa beef from Yamagata prefecture, and Omi beef from Shiga prefecture – the three great Japanese beefs – as well as Kobe beef from Hyogo prefecture, branded pork such as mochibuta pork, sangen pork, kurobuta pork, and Agu pork.

Ningyocho purchase their meat from all over Japan, selecting only the finest cattle for the season. They only use female cattle because they believe female cattle are softer and of better quality than male cattle. And unlike other Shabu-Shabu stores, they age their beef according to the stock. This is the experience and art that help to differentiate them from others.

Although its history is short, shabu-shabu is a traditional Japanese nabe dish enjoyed throughout the year. There is a theory that shabu-shabu actually came from China, and that it is a hot pot dish from Beijing called shuàn yáng ròu 涮羊肉. It is a dish eaten by dipping stewed mutton into a thick sauce. Japanese immigrants who returned from China after World War II introduced this dish to Japan. It then transformed to become a dish aimed at Japanese people, with the meat used changing from mutton to beef, and the sauce changing to soy sauce based.

This nabe dish brought from China was invented by Chuichi Miyake in 1952, who was working at the head restaurant of Suehiro in Eiraku-cho, Osaka. At the time, Chuichi Miyake saw a Suehiro employee wash a wet towel using a basin, and thought that it was similar to the movement of immersing meat in hot water in a nabe pot.

Therefore, he named the dish after the onomatopoeia of water splashing, “shabu-shabu”. Additionally, one of the reasons why this dish was invented was to become a countermeasure against the summer period when yakiniku (grilled chicken) doesn’t sell as well. Although shabu-shabu is presently eaten throughout the year, it was initially a summer dish.

The ritual of Shabu-Shabu しゃぶしゃぶ 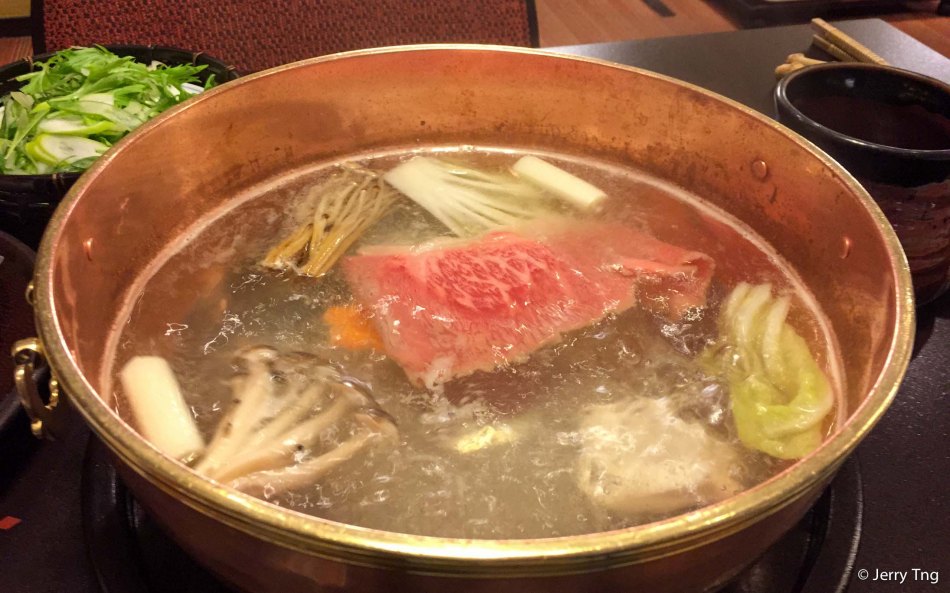 As usual the beef was simply divine. The portion for lunch was much smaller (70g), but you can always upsize to the 120g (shown in the picture) version. The more elaborate dinner version can be seen at a different visit to another store. 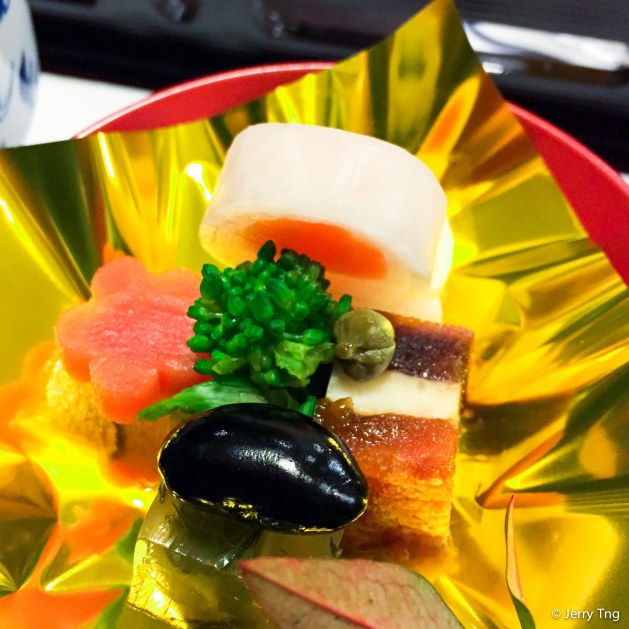 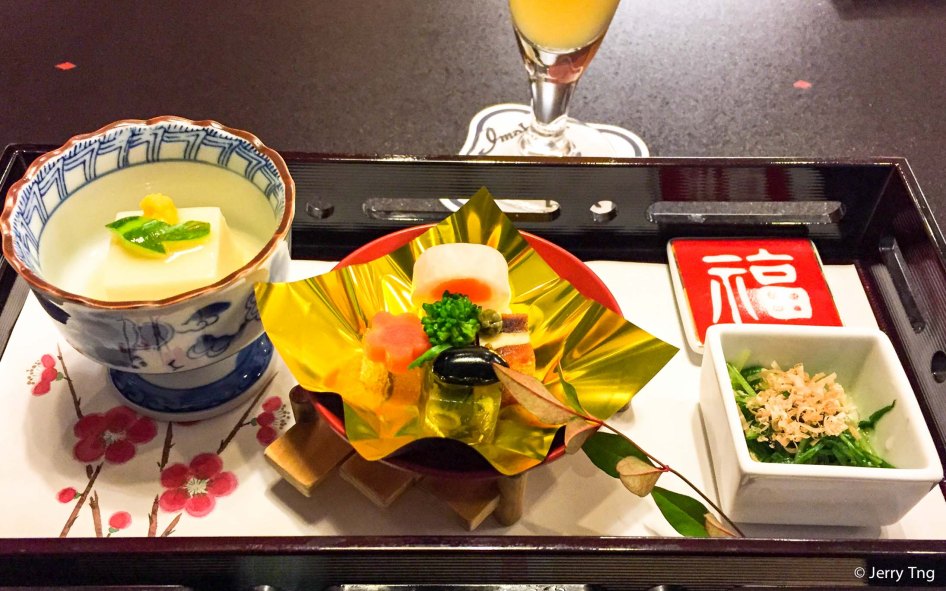 The lunch started with a simple 3-type of starters that included a cold tofu with simple dashi, blanched spinach with yuzu and sesame, and an elaborate assortment of daily specialities.

A number of sauces can be used to dip meats and vegetables when eating shabu-shabu. Normally, the raw meat is dipped into the hot stock for just a few seconds, as the pieces are sliced paper thin. Putting all meat into the pot in one go may result in overcooking the meat. There are a variety of sauces that can be used to dip the meat and vegetables, including ponzu sauce and sesame sauce. Restaurants usually provide soy sauce, sesame paste, ponzu sauce and several other condiment options such as spring onions and Japanese pickled carrots so that customers can make the sauce according to their own preferences.

After eating all the meat and vegetables, soup will still be left in the pot, full of the flavors the other ingredients have left behind. This leftover soup is used as the base for various dishes called “shime,” which means “the end of the meal.” Soup dishes other than shabu-shabu also make use of leftover soup for shime, as it’s a waste of perfectly good soup otherwise. Ramen is Japan’s most popular noodle dish and is a staple shime dish, as it goes well with any type of broth. 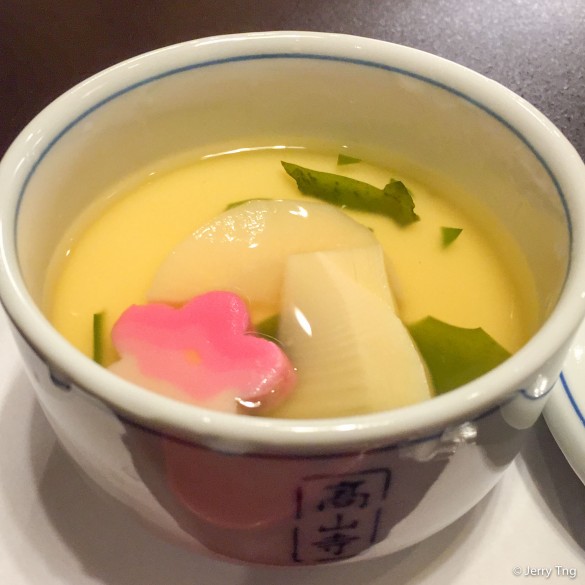 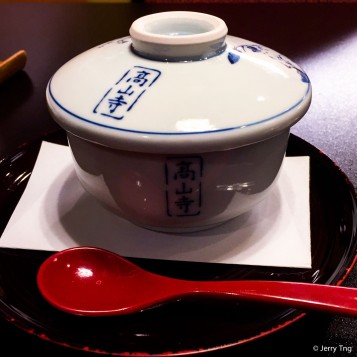 For lunch, it came with a chawanmushi and a simple ice cream for dessert, The sashimi was an ala carte order.

Service is impeccable in all Imahan stores. But be prepared that the staff do not speak good English, just simple words to bring you more beer.