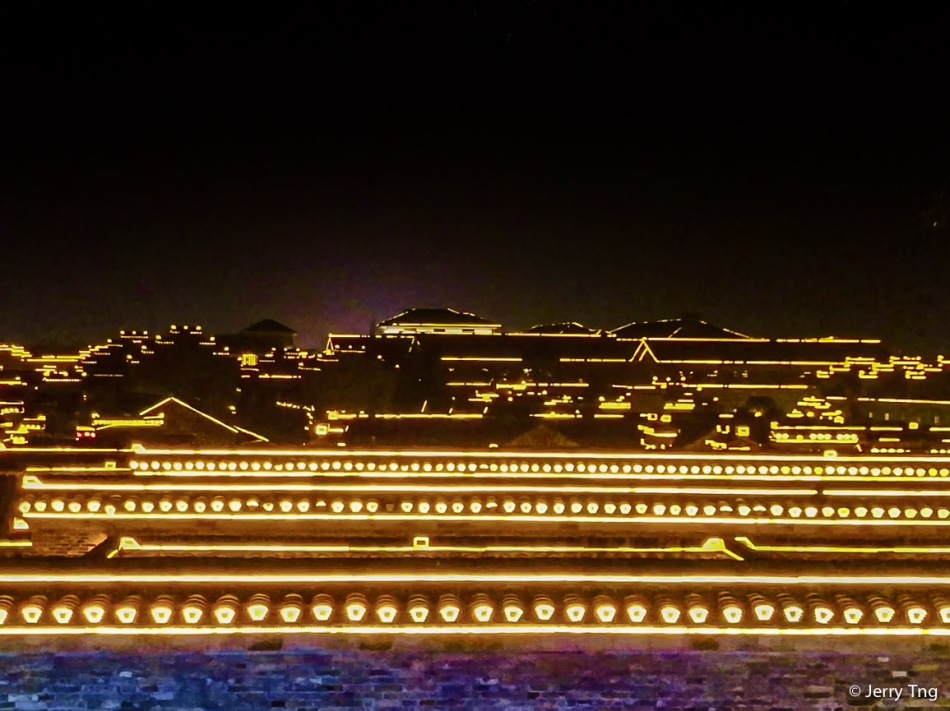 Lying to the west side of Zhenjiang is an ancient street that saw tides rose and fell along the Grand Canal since the Three Kingdom.

Zhenjiang, on the southern banks of the Yangtze River in eastern China’s Jiangsu Province, is known for its surrounding hills. It is opposite Yangzhou (to its north) and between Nanjing (to its west) and Changzhou (to its east). Zhenjiang was formerly the provincial capital of Jiangsu and remains as an important transportation hub.

The town is best known in China and abroad for its fragrant black vinegar, a staple of Chinese cooking. The present recipe is said to date back 1400 years, with its major modern manufacturer— the Jiangsu Hengshun Vinegar Industry Co.—dating to 1840.

Xijin Ferry Site was built during the Three Kingdoms period (220-280 CE) as one of the major ferry point along the Yangtze River. It flourished during the Tang dynasty when it served as the ferry terminal for scholars to travel to Nanjing where the capital was. Most of the ancient buildings in this historical site was built during the Ming and Qing dynasties, but there were a lot of traces of Tang and Song dynasties relics as they rebuilt the site for modern use.

Right across the old ferry terminal was an ancient street that existed since a thousand years ago.

The best time of the day to visit is dusk.  The setting sun casts a golden glow everything and gives it a warm feeling to the brick wall.

The same view at night, when the lights came on, the place became alive..

Looking up to Mount Yuntai, one can see the beautifully lighted Yuntai Tower shining as a beacon in the clear night. In the foreground was the Iron Pillar Shrine 铁柱宫. The Taoists call their place of worship shrines 宫, while the Buddhists call theirs temples 寺. So this was the shrine for the Taoist immortal Xu Xun 许逊 and was built in Ming dynasty by Emperor Chongzhen who was a strong believer of Taoism in 1637. In the shrine was a dragon pillar made of cast iron that allegedly was put in place to tame the river dragon to ensure safe passages for the commuters.

On the old street you can see two different styles of architecture, with the Jiangnan style on the left and the Nationalist era style (simpler) on the right.

As the main street led to the pier, folks will wait at this Waiting Pavilion 待渡亭 that offered a panaromic view of the river and approaching ferries. These days as the piers have lost most of their purpose, this pavilion remained a good meeting place for your friends who were wondering around the place.

The pavilion is right next to the West Gate 西卷门 that has the inscriptions “Layers of hills and soaring pines” 層密聳翠, that leads into the .

As all ferry terminals go, there’s bound to be associated with religion. A trip down the canal was not exactly safe in the old days, and the passengers will pray to Buddha for a safe passage. Hence, the Guanyin Cave 观音洞 was built for worship to the bodhisattva Padmapani, which in Chinese buddhism is the Guanyin 观音.

A short 50m stretch of road showed stone pavements pathed on top of each other that spanned 5 dynasties. Aptly named “A view of a thousand years” 一观看千年, this could easily be missed if you just hurried through this historical stretch of the old road.

Tibetan buddhism came to China and they built this ZhaoGuan stone pagoda 昭关石塔 during the Yuan dynasty (founded by Kublai Khan). Today, it is the oldest surviving stone pagoda from that period.

Beyond the arch of the East Gate 东卷门 with the inscription 同登觉路 “Path to Enlightenment” is the site of the oldest Lifesavers Association in China. Built in1693 during the reign of Kangxi in the Qing dynasty, the Lifesavers Association was made up of volunteer life guards that would help drowning ferry passengers when ferries sank in the canal, and they have been doing so since the Song dynasty (1136).

As this was the mid point for people travelling from the South to go to the North for the imperial examinations, many housed were built during the Song dynasty to house these students, candidates and officials. Many of these houses were used up to the Nationalist period (after 1911) until Generalissimo Chiang came here and used this as a temporary government base while he was fighting the Communists during the Chinese civil wars. Nobody actually knew which house did he use as his home, because there were so many!

About Chiang, he was engaged to Mdm Sung Meilin here in Xijin at the now-defunct DaHua Hotel 大华饭店 (the actual position is now rebuilt and reopened as Yashi Hotel). 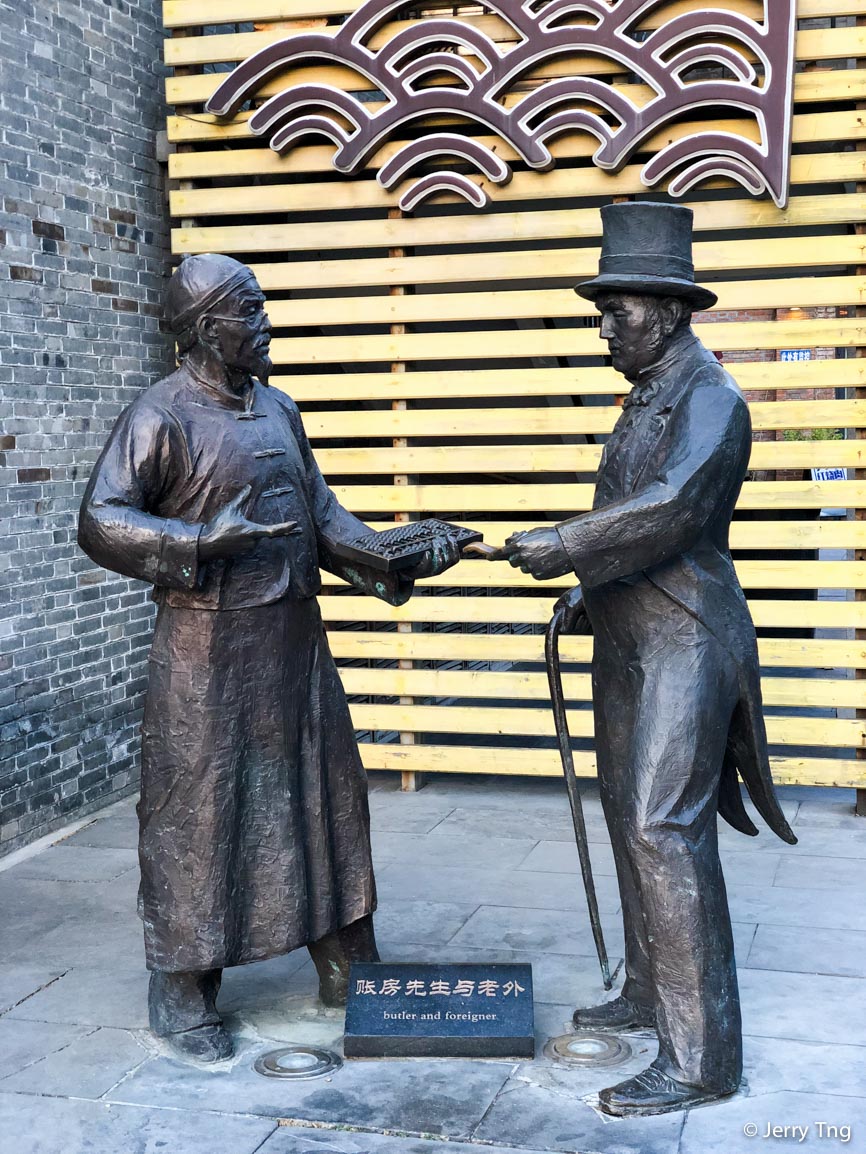 Shangqing Theater 尚清戏台 was built for staging performances to thank the deities and gods for blessing the population with good harvests and safe passages.

Jianyuan Plaza 鉴园 is the main plaza/entrance to the Xijin Ferry Site. From here, you can see the newest buildings in the cluster, built during the English settlement period. Yes, because of the Opium War, Zhenjiang was conceded to the British and they built their embassy and trading posts in Zhenjiang. There are still many buildings built in the British colonial style that would remind you of Singapore.

This is a modern recreation of the Tang dynasty tower that was on Mount Yuntai. OK, it’s more a hill than a mountain but it is definitely worth the climb up the stairs to get to the top.

This is a reconstruction. The original was burnt down during the Cultural Revolution.

On the top of the hill call Suan Shan 蒜山 is a pavilion called 蒜亭 Suan Pavilion. 蒜 garlic has the same sound as 算 calculation. Of course, it’s not garlic hill. According to historical records, during the Three Kingdoms, Zhou Yu 周瑜 and Zhuge Liang 诸葛亮came up with the plans of the famous Battle of Red Cliff 赤壁之战 on the top of the hill. Because it was a marsh filled with wild garlic, it was renamed 蒜山 later. Go figure.

Out of all the antiquities around here, there’s a block of modern apartments that was built due to poor city planning in the early years of the economic boom in China. Since it was built, there’s nothing they can do about this for the 70 years, the duration of the lease of the apartment.

This is the site of the old Zhenjiang train station. You can still see the old tracks on the ground and the turnstile has been converted to a water feature.

I once took this train from Shanghai to Hangzhou. It was like KTM trains in the 70s from Singapore to KL. They are still in service today, in the more regional sectors.