I have the pleasure of celebrating birthday with someone special. She wanted to do something special and usually we would just go Hong Kong instead. But we decided to try something different, something we had wanted to try given good feedback. Never would it turned out to go on my blacklist.

Wang Steak is a novelty. When China first opened up to foreign investments, Wang Steak was one of the first Taiwanese F&B groups to come in and took a beachhead for Western cuisine.

The Chinese were not ready for blue blood, authentic Western food. The first wave were these Sino-Western food, Western techniques with Chinese flavours or influence, like Wang’s TaiSuo Steak – a totally cooked piece of ribeye on bone cut sideways which you would not find anywhere else in the world.

The Legend of Wang Steak

It was said that the richest man in Taiwan, the late Mr Wang YongQing 王永庆, was not fond of seeing blood in his steaks. But steaks cooked well-done were rubbery and tasteless. However, what Wang wants, Wang gets. His third wife stewed the ribeye with bone in the traditional way and the result was a fork tender piece of ribeye on bone. This is then (horrors!!) grilled in the oven to get the caramelisation on the crusts. The guests loved it! (Who would dare not to?)

Anyway, after the horrendous treatment of a perfectly good rib, it was served for dinner with foreign guests that required steaks. Hence Wang TaisSuo-style Steak 台塑牛排 (named after Wang’s corporation, Formosa Plastics 台塑) was born.

Everything in Wang Steak is a set. You can order ala carte, but the main course is the price almost close to the set. A steak ala carte is ¥380, the set is ¥369. Go figure their strategy. 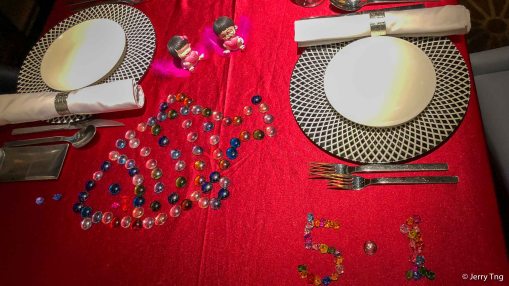 They took a lot of effort to decorate the table. But it was really cheesy. If I was in my twenties, I would be impressed. But this is clientele that Wang’s targeting anyway.

Dinner started with a non-alcoholic sparkling peach drink. One of many drinks that would be served tonight.

Chopped salmon and avocado in a deep fried wanton cup, a slice of lobster with foam of dubious origin and basil sauce and a lobster mayo wrapped with konbu. Decent start, but if this is what we should expect for the rest of the evening, we are screwed.

The dubious foam struck again! They could have just left the foie gras alone and the course would be perfect. Wrong plate for a nicely pan fried foie gras. The metal pan took the heat away quickly and the foie gras turned cold very quickly.

You would expect a bisque when you see seafood. Then it’s a vegetable chowder that’s sweet with an overwhelming carrot and tomato flavour. Lumpy in texture, the prawns were totally out of place in this vegetable soup.

Someone on the internet called this “the bath water of the cow”. And he was quite right. It did not have the robust yet satisfying intensity of the French consommé . The soup was watery and the pieces of morsel mushroom and beef bits were pathetic.

I never had a hot palate cleanser – hot sour plum tea. The sour plum messed up with the palate rather than clearing it. I have absolutely no idea what’s this drink doing here at all. Pretty out of whack in terms of rhythm to the meal.

The original plating was just two racks of lamb criss-crossing each other.

We had to rearrange them for the photo shoot 🙂

But the lamb was pretty good, slow cooked and then properly crusted. Finally something nice.

Came with a side of warm vegetables with the dubious foam.

The signature rib, the Wang TaiSuo Steak. We left it alone. Really horrible. Why would anyone order this at all? The meat was dried out from all the cooking. The braising made it worse. Tasted like beef jerky, but a warm piece of beef jerky.

Happy birthday to me….

They were kind enough to throw in a birthday cake for us. And then the staff came over to sing the birthday song like Swensen’s used to. #Facepalm

This dessert was really pretty to look at. The sugar “golden nest” glistened under spotlight and covered the pudding and lychee sorbet in it. It’s nice to look at, but my companion was not impressed by the taste. It’s like a cheap ice cream from the supermarket and the pudding was quite bad too.

Pretty, but not as dramatic as the lychee sorbet. The ice cream was supposed to be coconut, luckily it wasn’t and it came with mango ice cream. Again, everything tasted like they were made in bulk. The Napoleon was really hard, the mango was really sour.

Again we were so bored that we started messing with the plating again.

The service was outstanding by Chinese standards. The decor was cheesy and outdated -red velvet seriously? The ultimate letdown was the food. It was neither Western (not to mention French) or Chinese per se.

Wang Steak is a relic of its time, a simpler time when this type of Western restaurant wannabe would do. Most Chinese then would not have the opportunity to experience such 高大上 “high class” restaurants, when their monthly income would be just be enough to pay for a meal here.

Fast forward 40 years, the middle income group has become more discerning and exposure to foreign tastes. They may still not like them (most Western restaurants closed after the novelty wore off), but they know what’s good and what’s bad. So to survive with just novelty and service are no longer enough in the cutthroat market in China.

The shop is under renovation(?), but in China, who knows? It could be closed permanently.