Kempinski at Stamford Road is one luxury hotel that has been long overdue. The hotel delayed the opening because of investment disputes and then we could not go because of Covid-19. Hence, we waited with anticipation on the dining options at Kempinski, especially one that’s linked with Demon Chef Alvin Leung.

15 Stamford by Alvin Leung opened with lots of fanfare in Jan 2019, a lot of media coverage, and a lot of anticipation. I have been to his 2-star Bo Innovation (lost a star in 2020) in Hong Kong, and really enjoyed that experience. Chef Alvin is not a formally trained chef, but because of that, he is very bold in experimenting with techniques and ingredients.

I have ordered from the a la carte menu all the items marked as “Signature Dish by Chef Alvin Leung”. These are marked with a red demon icon next to the name.

If the innovative style of Chef Alvin can be encapsulated in a single dish, this would be it. A play on the Nyonya pie tee, the filling is made with cubed yellowfin tuna dressed in a Korean gochujang dressing, and topped with Japanese furikake. Even the pie tee has been given a Chef Alvin’s twist – it is made with nori in the batter.

It is given a Gen X treatment with avocado in the mix. Overall, a perfectly balanced starter with sufficient heat, yet not too much to cover the rest of the flavours. Recommended, came with four pieces per order served on a bed of grains that cannot be eaten.

For the salad, I ordered the boringly named three style corn – grilled corn kernels, popcorn, baby corn – served with heirloom tomatoes that has been marinated in a pat chun vinaigrette.

No kidding, there’s only three type of corns tossed with the marinating juice from the tomatoes and nothing else! So what’s so special about the pat chun vinaigrette.

Pat Chun was founded in 1932 by Mr Ng Wai Sum. The words Pat Chun「八珍」refers to a phrase in the ancient Chinese Book of Rites that described precious ingredients used in concocting hundreds of sauces with different flavours.

Ng Wai Sum’s father Ng Tong is a master chef from the city of Shunde, the traditional seat of Cantonese cuisine. Ng Tong trained his son in the skill of brewing hundreds of sauces and the craft of preparing traditional snacks and delicacies. After moving to Hong Kong, Mg Ng Wai Sum used these skills to found Pat Chun, and was soon well known for the most difficult art of sauce brewing – fermentation of traditional vinegars.

Frankly, I was expecting a deconstructed laksa. I was disappointed when I saw the laksa looked exactly like the ones I would make myself. However, when I tucked into the creamy rich sauce, I can see why this was different.

The soup base is similar to more lemak style of Katong Laksa. What stood out was the grilled tiger prawn – no kiddingly, it is written as a singular prawn and you only get one prawn – and the onsen quail eggs. Chef Alvin likes to experiment with smoke, you get a lot of it in his flagship restaurant in Hong Kong.  The quail eggs have a soft cooked centre like a raman onsen egg, and the white has a nice smoked flavour like a Danshui tie dan 铁蛋. And then there’s the lonely prawn, grilled to perfectly and topped with shrimp floss to accentuate the prawn flavour.

However after the initial euphoria, you realise that it is still a bowl of laksa, and nothing more than that.

Next up, beef rendang as interpreted by Chef Alvin. This is where the centrepiece wood fire grill is put into the limelight.

Right in the centre of the open kitchen is the specially built wood fire grill. Every so often, you can hear the sizzling of animal fats in the kitchen, see a flaming meat with that satisfying burning smell of BBQ. Yet, the smoke does not permeate through the restaurant.

The beef short rib has been sous vide before its baptism of fire for that charred BBQ taste. It is fork tender but not so tasty. Luckily it has the rendang sauce, shaved coconut and Nyonya achar to save the rib.

The waiter warned me that it is a dry BKT, not the soup variety. And he is absolutely right, it is a very dry BKT.

Imagine that you cooked your pork prime ribs until you extracted every bit of flavour into the soup. That what you get with the BKT. It is again saved by the angelica BBQ sauce, which is like the dark sweet soy sauce used for BKT combined with the KL style BKT herbal pack. And then there’s the grilled compressed watermelon. Compressing the watermelon has concentrate the flavour and grilling evaporates the moisture and concentrate the sugar even more. Yummy, but I would not order this again.

My faith in Chef Alvin was reinstated when the chendol was served. It has all the ingredients of a good chendol, except they are each presented in a form that you would not be expecting, other than the chendol jelly noodles.

Coconut cream has been whipped into an espuma, the red beans made into ice cream, the gala melaka made into a custard. But there’s this unknown component – a red bean husk. Could not fathom why that’s there. When you combine everything and eat it in a mouthful, the familiar chendol reconstructed in your mouth. Definitely instagrammable and tasty dessert.

Made up of three parts – a soufflé, an ice cream and a biscotti.

The soufflé was a bit grainy to my liking, but it does taste like kaya (coconut egg jam).

The palm sugar ice cream was the piece de resistance in this dessert. Sweet, smoky, this is how my childhood desserts where like – down to earth and satisfying. 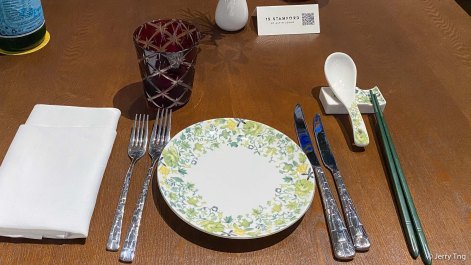 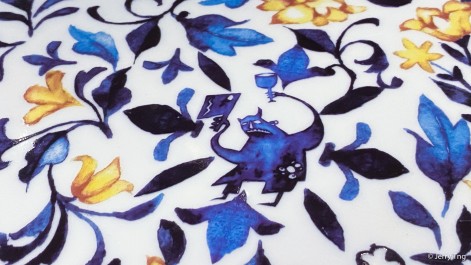 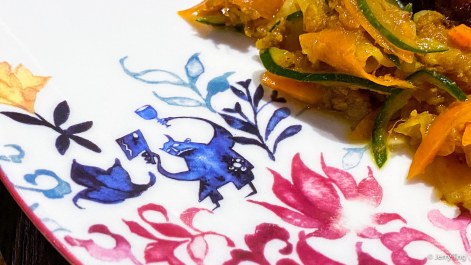 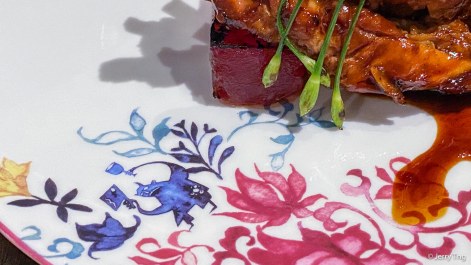 Here’s a little game you can play while having your meal. Look for the devil all the chinaware. They are masqueraded among the Peranakan motif used in the decoration of the plates. You may go through the whole meal without realising this little detail and though that these are beautiful Peranakan dinner service.

Currently the main door is closed so you can only access the restaurant from the hotel entrance. Because of Covid, it is not packed and some items are not on the menu. The service is impeccable, and the food was alright. If you have AMEX, this restaurant qualifies for Loving Dining privileges. I think it will eventually get the Michelin star, so come and try it before it does. However, it would not be a restaurant that I would frequently go because I still feel it’s all too gimmicky.

0 comments on “15 Stamford by Alvin Leung”