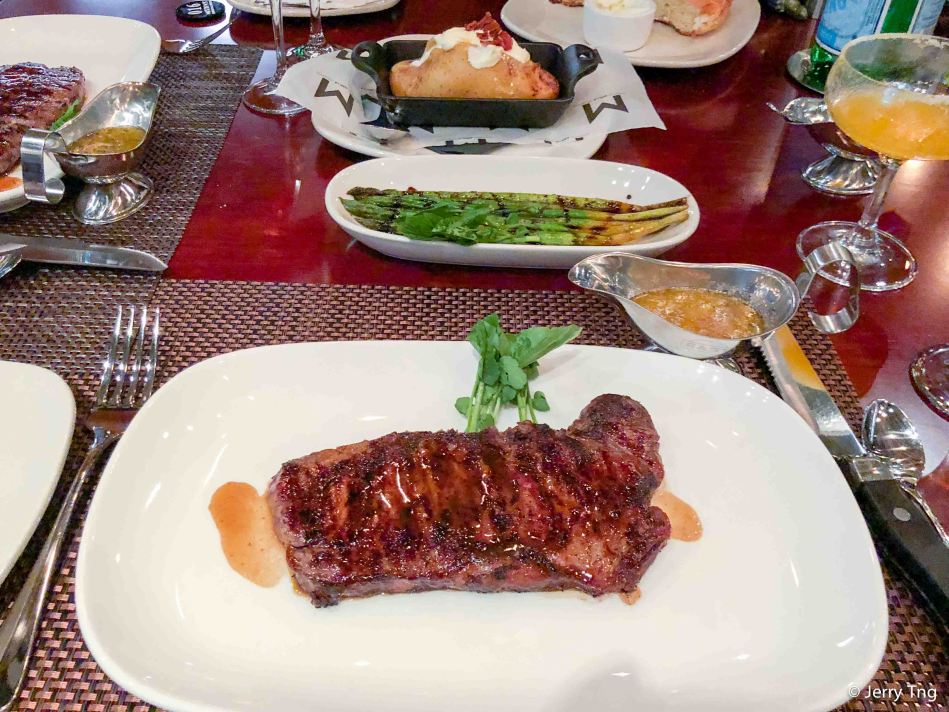 With the largest expatriate community in China, Shanghai’s selection of places to enjoy a great steak is growing by the month. New restaurants are importing world-class beef cuts. Some of the best steaks you’ll find in Shanghai look and taste no different than one you’ll find in, say, Dallas, Texas. But the same piece of meat can turn up different with a different chef.

There are few things in life that give one the same level of satisfaction as cutting into a nice, juicy steak. Plump, marbled, medium-rare beef is the preferred meal of many who are celebrating an occasion, trying to impress clients, or simply treating themselves after a long week. Couple this with a glass of red wine, maybe a side of steamed vegetables and mashed potatoes, and you have one of the finest meals the world has to offer.

This is the Shanghai branch of the world-famous Chicago-based steakhouse chain. And it is everything one has come to expect of Morton’s, from classic wood paneling, brass and etched glass to the world class steaks. Prime-quality cuts on offer here range from petite filets to massive rib eyes, as well as three cuts of USDA prime cuts. And they serve all the classic sides and accouterments as well, like asparagus with hollandaise, iceberg salads and a world-class selection of fine red wines.

And of course the signature “Mortinis”.

The Onion Brioche was their signature bread and I was disappointed that it came out cold.

Jumbo Lump Crab Cake was so salty – did they use canned crab and just fried it?

Jumbo Shrimp Alexander consisted of three jumbo prawns that has been grilled with tails on with a BBQ sauce and sprinkled with bacon on avocado. Never trust a dish that has avocado, it usually meant that it was not very good and therefore needed avocado to up the quality. I am afraid it was the same here. The shrimp were overcooked and dry. Enough said.

Chopped Salad from any steakhouse is usually a simple tossed up coleslaw with plain vinegar. The bacon bits that were added did not tasted natural, it was liked those you get in supermarkets in shrink-wrap and sometime called Turkey Bacon. Reconstructed, it seemed.

The New York Strip is a standard steak, which should not be confused with being average. Rather, Morton’s sets their standard very high and each of their restaurants are nearly identical in terms of their products and services. Consistency is the key, and anyone having a Morton’s steak in San Francisco, for example, can come to Shanghai and get the exact same standard. Or one would expect.

My companion commented that it was bloody even though it was medium. And cold plates, my goodness. And I don’t think it was an aged piece of USDA beef.

The Ribeye was 16-ozs of Australian imported beef, cooked in Morton’s top-down broiler that was designed to lock in juices and enhanced the taste. In general, ribeyes have the richest flavor of all steak cuts. The chef didn’t add much when preparing this slice of goodness, just a little salt and pepper topped with splash of Au Jus, but nothing else was really needed. A béarnaise dipping sauce is served with the a la carte steak, which was nice but also unnecessary.

Items at Morton’s are sold a la carte, which makes things expensive, yes, but it’s a meal you probably won’t forget. Having said that, think about ordering a few sides to go with the steaks, like the Sour Cream Baked Potato and Jumbo Green Asparagus. You get a huge Russell Burbank potato baked to perfection, sprinkled liberally with chopped bacon, and dabbled with a huge blob of sour cream, that’s a meal by itself. I would love the bacon to be crispier, and where’s the quintessential chives and scallion bits?

Well, the asparagus for the evening was green alright, but not jumbo. One would expect the thick, succulent variety from Australia or US, but I suspected that this was the local variety. Too soft to my liking, drenched with olive oil and balsamic vinegar reduction, I found it underwhelming given all the past experience I had with the steakhouses.

As it’s an extremely rich steak, a full-bodied, acidic wine is recommended. The Napa Valley Duckhorn Decoy Cabernet Sauvignon is an excellent choice because the ciders, raspberry and other red fruit characteristics tie the entire plate together (i.e., steak, potatoes, and asparagus). It’s a relatively unknown wine that is standard, so standard in fact that they serve it as the house wine at The White House.

Obviously there was some teething problem as it was recently opened. However one would expect that with all the experience of rolling out Morton’s around the world, you would have gotten the formula for consistency and quality nailed down. But again, this is China, you learn not to expect anything.

The waiters were not very clever with the wine. The sommelier was not in attendance that evening we were there. (What!?! A steakhouse without a sommelier?) And the steak came out on cold plates (winter’s evening?) was again a tell-tale sign that something was amiss.

The overall dining experience was good, but for the price we were paying, I would go to other places available.

Other restaurants in Raffles City Changning: