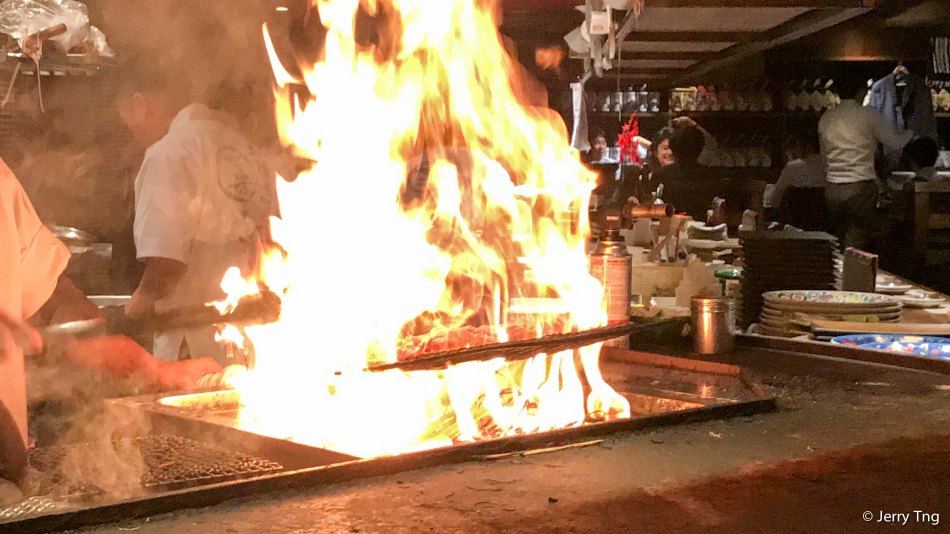 In Kochi, fishermen made bonfires of using straws and cooked their catch. This technique called Warayaki is quite a spectacle to watch and tasty.

Warayaki traditional cooking method in Kochi Prefecture in Shikoku, Japan. The burning straw provides a dramatic fierce fire with temperatures in the range of 800 – 900C- and this results in very fast and even cooking, as the high temperatures sear the outer layers and leave the centre of the meat or fish tender and juicy. 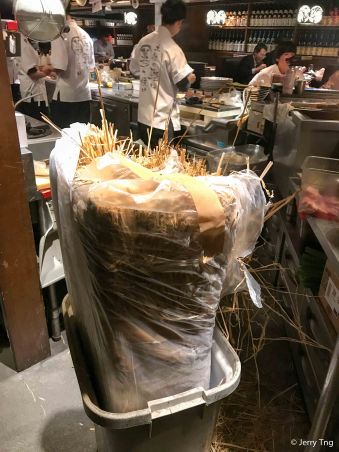 Additionally the burning straw adds a delicate “smoked” aroma to the cooked meats and fish.

The design feature of the interior focuses on the fire roasting cooking station behind a long “L” shaped counter bar. This is the highlight of the restaurant and provides the stage for the cooking performances of the head chef roasting the selected meats over the straw fires. There are a number of booths and small tables around the floor of the interior- catering for both small groups and individuals or couples at the bar counter.

釜揚げしらすと青さ海苔のサラダ Young Sardines and Aosa Seaweed Salad – Green laver, known as aonori (アオノリ; 青海苔) or “Aosa” in Japan, is a type of edible green seaweed. 釜揚げしらすと or Dried Sardine Fry is salty and used as a flavouring. The mixture of sardine and seaweed with salad was very Japanese and tasty.

どろめ Sardine Fry “Dorome” – Dorome are a local specialty of Kōchi Prefecture in Japan. In the Tosa dialect, dorome refers to sardine fry 2–3 cm in length. They are eaten fresh (raw), dipped in a sauce made from minced garlic greens, vinegar and miso. It is often served at Izakaya.

カツオの藁焼き “Warayaki” Skipjack Tuna – Kochi is very well known for Bonito. Traditional way of eating Bonito in Kochi, is that they grill the Bonito with big flame of fire from straw. Slightly grill and slice the block of Bonito and eat with Shoya sauce and garlic.

カツオの藁焼き “Warayaki” Skipjack Tuna – I loved it, it was oily, the Warayaki made it smoky and flavourful, yet the bonito had not dried out. Made a usually tasteless bonito really interesting.

夏野菜とウツボの揚げ出し Deep-fried Summer Vegetables – Take shiitake mushroom, tofu, eggplants, fish, deep fry them and them simmered in broth. After all the grilled food, it was a good interval.

磯つぶ貝山葵漬け Isobutsu shellfish in pickles – I am pretty sure Google Translate for this wrong, but it was a wasabi-flavoured shellfish. Again it was another bar food.

明太子藁炙り “Warayaki” Spicy Cod Roe – I loved mentaiko. Lovely when given the Warayaki treatment and it became my new favourite way to eat mentaiko besides dumping them on spaghetti.

きびなごケンピ Kibinago Kempi – What is Kibinago Kempi? Otsuki Town is a town on the southwest end of Kochi prefecture where sardines are caught. The big ones are eaten as sashimi and tempura, while the small ones are dried and fetched a good price. However, the medium sized ones are not used by restauranteurs and traded at cheap prices. So, the ingenious local came up with this dried sweet and savoury specialty called “Kibinago Kempi” that can be eaten as snacks. Served as a bar snack to go with your drinks, these packed great umami and provided great calcium and iodine fix along the way.

藁炙り鶏もも肉のにんにく醤油焼き “Warayaki” Grilled chicken thigh meat with garlic and soy sauce – This was supposed to be the piece de resistance for the restaurant, but it was underwhelming. I could not detect the smokiness, and the chicken was a tad too dry.

炙り鯖棒寿司 Seared Mackerel Sushi – The traditional sushi given the Warayaki treatment. The mackerel released a very flavourful oil onto the rice and elevated the entire sushi. And slight smokiness of the straw added another dimension to the traditional sushi.

柚子シャーベット Yuzu Sorbert – Dessert, nothing to shout about.

The service staff were very friendly. And before our banquet, we were “invited” to join in the traditional singing of fishing songs, celebrating the catch.