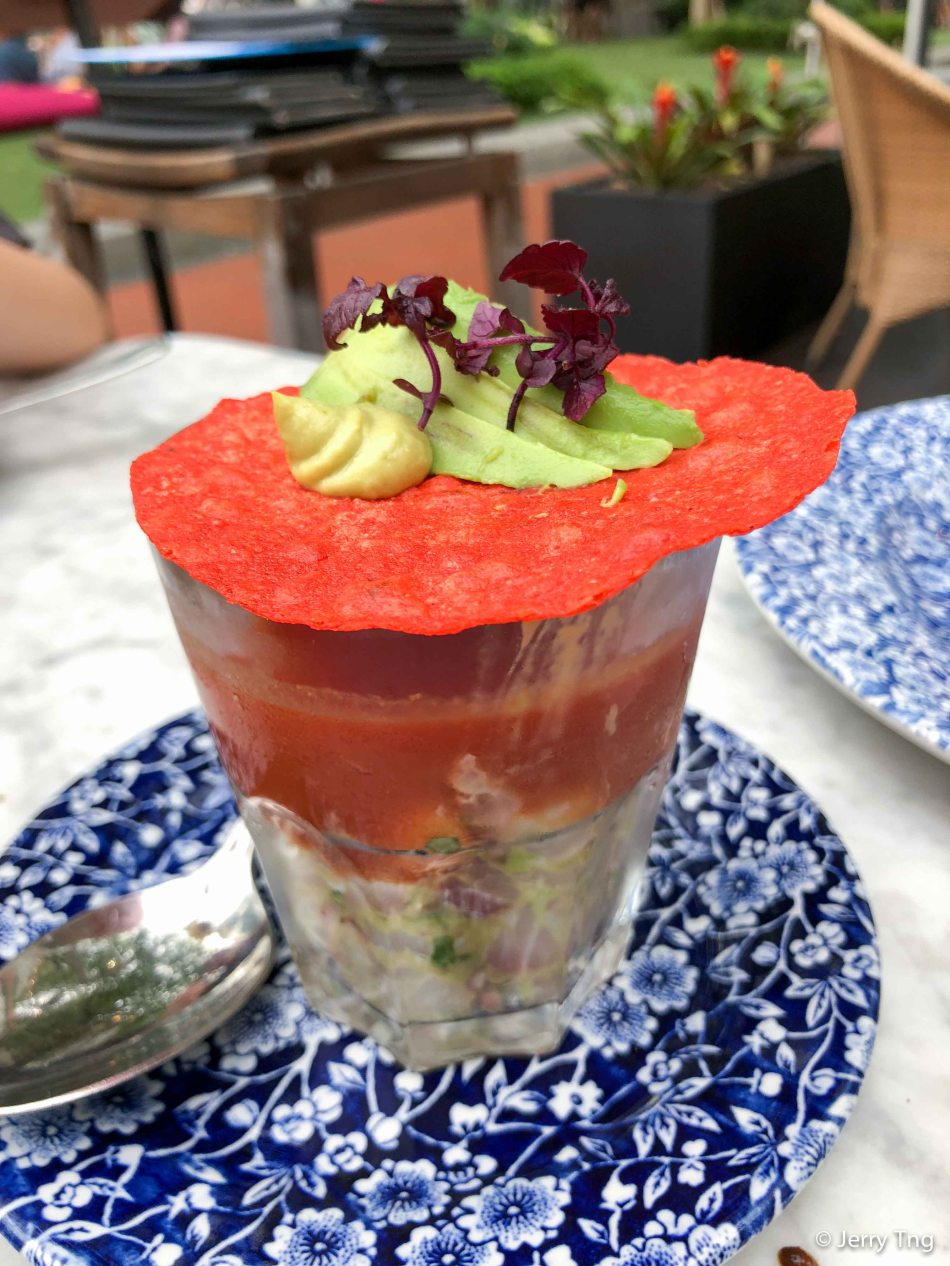 El Mero Mero (which means ‘the go-to guy’ in Mexican lingo) is situated in a Catholic convent that has been converted into a go-to place for drinks and entertainment (figuratively speaking, heaven to hell). Very split review, but I think mainly because Singaporeans are not exposed to the fine dining of Mexico.

I am no Mexican food fan. Mexican food always gives me the run. But I decided to give my princess an introduction to Mexican food. Food knows no prejudice. It’s only whether you like it or not, and it’s very personal. So I would not put an unfair influence on my princess before she tried it for herself.

Came in a coconut husk, it was liked a blended smoothie of coconut and pineapple with citrus from lime. Not sure what to make out of it as I wasn’t a cocktail guy. But I knew it wasn’t that good when there’s not little umbrellas.

Mojitoes I know, I drank a lot of it when I was out and about. And recently I drank my fair share of Virgin Mojitoes as well. It came in a bamboo canister, very cute.

You’re probably looking at the picture above thinking, “Hey those are enchiladas”. Oh, no my friends, these are enmoladas. What makes them different from an enchilada is that these tortillas are rolled in mole sauce. Whatever, it’s the taste that mattered.

Mexicana 101 : Mole is the generic name for a number of sauces originally used in Mexican cuisine, as well as for dishes based on these sauces. Outside Mexico, it often refers specifically to mole poblano. In contemporary Mexico, the term is used for a number of sauces, some quite dissimilar, including black, red/colorado, yellow, green, almendrado, de olla, huaxmole and pipián. Generally, a mole sauce contains a fruit, chili pepper, nut and such spices as black pepper, cinnamon, cumin, and chocolate. [Thanks, Wiki!] The most common that we all know is guacamole.

Also known as a ceviche, these are raw seafood cooked in a citrus like lime or lemon without heat. Citric acid has a very interesting effect on seafood like fish as the acidity breaks down the protein to create the same effect as cooking it. So the Spanish and Portuguese feature a lot of ceviche in their cuisine, after the conquistadors brought it back to motherland from Peru. But it was always a roll of dice with fate in Latin Americas and other place when it comes to ceviche.

The one we ordered was not their signature prawn with sea urchin. Instead we opted with a safer bet, Seafood Cocktail. It was built like a cocktail, with layers of seafood, tomato citrus presented in a glass, topped with a tortilla. The tortilla provided the crunch if you break it into the cocktail. We decided to pour it out and mixed it on a plate, instead of scooping it out with a spoon like an ice cream.

It was quite generous with squid, scallops bits, shrimps, clams, and they were fresh. The sauce was slightly spicy, I guessed it was spiked with tabasco. The acidity was just right, and it was quite delicious.

Pescadilla in Spanish means whitings or small fish. We ordered this starter Pescadilla Tacos because there was avocado in it. This was the Tex-Mex version of the Taco, very much like what you would get in Taco Bells, which btw was not founded by any Mexican. Mr Bells opened a hamburger diner close to the McDonald’s brothers and very soon found himself in dire financial status. So he came up with Tacos as a counter to McDonald’s. So Taco Bells was born (no kidding, I did my research). But I digress.

Couldn’t taste any whiting or fish.

Tacos – are mainly made from soft corn tortillas, the hard shell variant is almost exclusive from the tex mex style. Basically the tortilla was used like we do with popiah skin, or in the Middle East with their wraps. So taco is the descriptor for the container for the food and tacos are nothing more than meat or whatever minced or sliced meat put inside a tortilla. The most popular tacos in Mexico are: pastor (pork marinated with local spices and slow cooked in front of stand up grill, very much like a Turkish kebab grill), carnitas (slow stewed pork), suadero (from the breast of the beef), steak and chicken. All of them served with finely chopped cilantro and onion as garnish. Lime is optional. Salsa is a customary must but can be opted out if you want.

Quesadillas – nothing more that soft corn tortillas stuffed with cheese, preferably string cheese. Although here in mexico quesadillas are stuffed with many other fillings from potatoes and chorizo, sauteed mushrooms, poblano chilli with corn and cream, etc. In some parts of mexico even crickets, they are delicious but it isn’t everybody’s taste.

Burrito – large flour tortilla, about 12 inches. Stuffed with beans (this is what makes a burrito a burrito) meat and/or rice and many other fillings. Mostly stuffed with cheese as well. The purpose of the burrito? It was like the take-out choice from past times. Since it was already wrapped in its own tortilla you could eat it wherever you were.

Enchiladas – most of them made from chicken, vaiances may be made from turkey breast, or beef. These are folded tortillas stuffed with chicken, covered with green salsa, red salsa or mole sauce (which then make them an Enmolada). Topped with uncooked onion rings, cream and fresh cheese. Similar to our Chinese popiah 潤餅

Flautas – rolled tortillas stuffed with stewed beef or pork, deep fried and bathed in salsas much like the enchiladas. The difference? Flautas are hard and crispy. Similar to Chinese Spring Rolls 春捲

Pastor Taco is Grilled Pork Taco. And Kurabuta Al Pastor Taco, if translated, Kurabuta Pork Slow-Grilled in a Taco. The pork has been marinated very well and pairing with the tangy jalapeño parsley sauce, it was quite nice. A bit expensive for two pieces of tacos, and really very little ingredients.

How do you eat a taco? Pour some sauce, hold it by both ends and devour like a sushi. They should be finished in one-two mouthfuls. Anything bigger should not be termed as taco.

Who can resist the temptation of chocolate and churros? Deep fried dough with cinnamon and sugar dusting, and dip made from dark chocolate. Diabolic. Again that’s a word of Spanish original that is associated with Diablo, the devil. And so I shall not indulge too much on the sweets – sinful pleasure.

The service was quite prompt and attentive, despite that kitchen was quite slow even though it was an early evening crowd, i.e. not many people. I can see the service staff struggling between insulting the intelligence of the diners by explaining what Mexican food is, and totally ignoring the obvious. So everyone ordered tacos. If only they provided a primer on one of the pages. They cannot assume Singaporeans know Mexican.