Northeastern part of China is famous for their cold and long winters. It is not a known place for culinary excellence, in fact the food of Northeast is downright rough.

Because of the Great Leap Forward and Cultural Revolution, many middle-aged folks have grown up eating these 东北菜 (Northeastern Cuisine). There were many horrible stories from that era – people starving to death because the officials had to “submit” tremendous growth results. The famine was actually induced by these corrupt and ignorant officials that caused the whole agricultural and industrial systems to collapse.

The social commune (人民公社) was a relic of that era.

The ideology was to create a utopia where everyone is equal and share the fruits of the collective effort. The social commune promised food on the table and clothes for all that participated, and soon enough, the system collapsed because of freeloaders, lazy individuals eating off the labour of the hardworking few and corrupt officials that falsified statistics in exchange for promotions.

What was memorable, from the descriptions of some friends that survived that era, was the feeling of togetherness among the youths. Youths from all over China, particularly from cities like Shanghai, were sent to Northeast villages to participate in raising the standards of living in the rural areas. Of course, there was the Da Guo Fan 大锅饭 (literally “big pot of rice”), which later become a derogatory phrase for freeloaders.

Because of harsh winters, most places would have brick stoves called Kang 抗, and most would place a woollen blanket (everyone had the same blanket and design) and sat on the “kang” for their meals. And in the middle of the “kang” would be a huge cauldron and all kinds of ingredients will be thrown into it to make a stew where everyone would partake from the same cauldron. This is where the origin of “da guo fan” comes from. 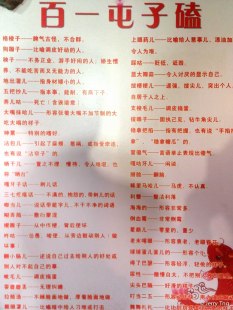 This restaurant capitalised on the memories of the era to create similar atmosphere of that period. While it was tragic (it was one of the largest man-made famine according to research), many had fond memories because they were young and foolish, they genuinely believed in the utopia.

Pig in a pot 杀猪菜 – When the village slaughtered a pig, nothing from the pig was wasted. Scarcity of good meant that the good ladies of Dongbei came up with ways to cook even what we would have thrown away. “Pig in a pot” was the perfect example.

Literally meaning “Course from slaughtering the pig”, it is a big enamel wash basin (a normal pot would not hold the amount of stuff) filled to the bream with pig knuckles, intestines, blood jelly, innards, pickled cabbage and vermicelli. The whole basin will be put on the stove in the middle of the “kang” and stewed for hours. What resulted is a pot full of flavour that compliments plain rice.

Braised pig’s head 卤猪头 – Nothing is wasted except the pig’s teeth. This plate of goodness were from the pig’s head – tongue, ears, cheek, jaw – and also the pig’s tail. Great appetisers for drinking beer.

Carp in heavy sauce 酱鲫鱼 – Carps are found in abundance in the rivers in Dongbei. Because of the cold waters, they are fatter and more flavourful than their southern cousins. Usually, we would not have ordered carps in the south because they have many fine bones. By stewing it in heavy sauce, it was even more difficult to pick out the bones.

However the Dongbei variety has bigger bones, and the whole dish was really tasty, but too oily. It had to be oily, the temperature of the surrounding would chill the fish in no time if not for the heavy layer of hot oil.

Pork belly with tofu 猪肉炖干豆腐 – Another part of the pig “sacrificed” for our belly. This time it’s the pork belly. Because of all the oil in the belly, it had to be stewed with something that would absorb the flavour and reduce the greasiness of the dish. Enter the dry bean curd strips.

The soft tofu cannot be made up north because the cold will just freeze the moisture in the tofu. Instead, they made “dried tofu” which in the south we called dry bean curd skin. It is made by pressing all the extra moisture out of the tofu and smoked dry.

The smokiness of the bean curd added more dimension to the uni-flavour of the soy sauce that was used to stew the pork belly. Unlike southern stew, there was almost no spices like cloves and cinnamon used in this. So the flavour profile came from the addition of the bean curd.

Scrambled eggs with chives 韭黄炒蛋 – Again, because of the harsh environment and the latitude, there’s long period without the sun and so only hard vegetables like chives can survived. This was a simple scrambled egg with yellow chives, yellow because the chives were not exposed to sunlight.

Drinking from the bowl 大碗喝酒 – Dongbei people are a jolly, boisterous bunch. And glasses are for Baijiu. Beer, you drink them from big ceramic bowls. Chilled just above freezing point, these cold beers were fantastic to wash down the really heavy and oily food. 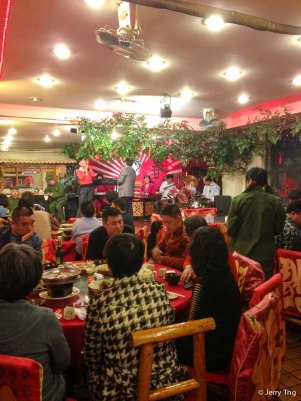 Remember that it was an era before TVs and movies, and the only way for these Northeasterners to get some entertainment was to watch these sketches live in the social commune.

These days, the Er Ren Zhuan has gone down in (moral) standard and usually contains dirty-talk and sexual jokes that demeanours the fairer sex. If you are constantly worried about being politically-correct, this is not the show for you.

There are many Dongbei restaurants across China these days. But it still worth the effort to visit this really unique region in China.