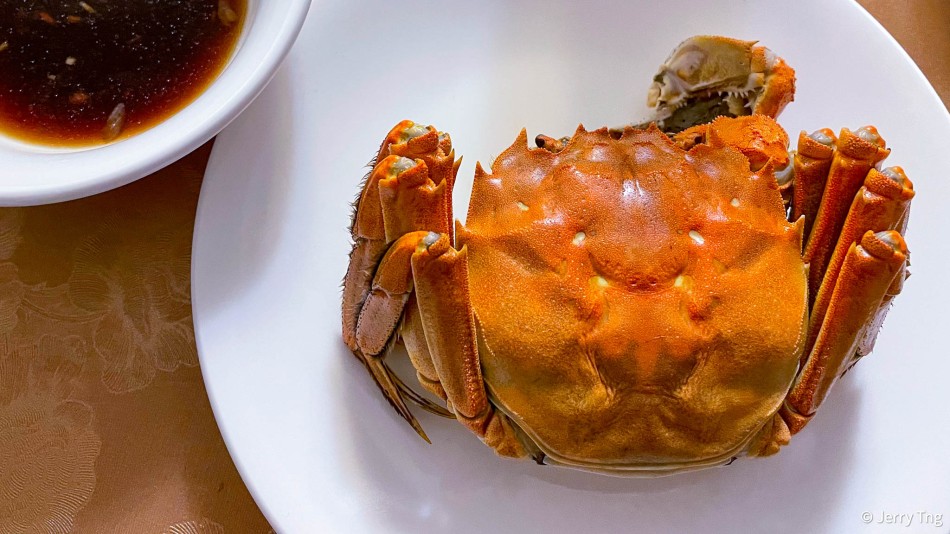 I was not hopeful that I would get my annual fix of Yangcheng Lake hairy crabs this year (2020), and the peak of the crab season was around the corner. Then I got the all-clear to travel to China.

What are Hairy Crabs

Bacheng 巴城 is the hairy crab capital of the world. Yangcheng Lake is right next to it and so many restaurants in the area catered to the gourmets that come every year to look for that delicacy call 大闸蟹 Chinese mitten crabs.

It is called hairy crab because of the hairy legs and hair on the two pincers. The Chinese mitten crabs are not as rare as we thought it was, as it can be found in large bodies of freshwater around the Jiangsu and Zhejiang areas. But the most prized variety are the crabs from Yangcheng Lake near Suzhou.

The reason is that the bottom of Yangcheng Lake is laid with rounded pebbles as opposed to gravels or sands in some other lakes around the area. The pebbles give the crabs their uniquely white belly and golden hair.

The best crabs are those that are still in the water that nurtured them the day of the eating. This restaurant (and some others along Bajie Road) has its own hatchery and crab farm in the lake. They don’t supply to others, only to their own restaurant and to the regulars who come here annually for the crabs.

Their crabs live happily in the lake until harvest. And some were left over a season and they grew to an abnormal size (above 600g) which disqualified them to be supplied to regular restaurants. Restaurants sell their crabs by pieces instead of by weight. Therefore, most restaurants want 300-450g sized crabs so that they can sell more crabs. These larger crabs are usually 3x or more expensive than the regular ones.

The kitchen is opened only for the crab season which runs between late September to January. Then they close just before Chinese New Year for the rest of the time until the next season. There’s no menu to order from as they only serve same 10-course dinner every year.

Once we were settled into the room, the appetisers were already waiting for us on the lazy Susan. I enjoyed the braised pig’s ears and deep fried fish. I am still trying to figure out what fish they were.

It may sound strange, but this chicken really tasted like chicken. Over the years, as the food supply changed from family farms to commercial operations, chicken rearing has become an industrial SOP of producing as many chickens as possible. The chickens were given injections of antibiotics and growth hormones to make them grow faster. And over the years, the chicken tasted less, well, like chicken. Not here. The chicken were raised in their compound and used every year only for this night. They were brightly yellow, slightly chewy but full of flavours that reminded me of chickens my mom used to serve from my childhood Chinese New Year celebrations.

These shrimps are food for the crabs in the lakes, but now they are food for us. Simply blanched in salted water and cooking wine to get rid of the freshwater seafood taste, there’s no culinary skill to talk about, only the gifts of nature.

Another crab food that became our food on the table. These periwinkles were fat and succulent. For the uninitiated, you picked them out with a toothpick for that tiny morsel of flesh. But the joy was simply sucking the meat out of the shell so that the sauce and juices were all mixed with the shellfish.

I never enjoyed river fish because they tend to taste muddy. This was always my least favourite dish, but hey, they are crab farmers not restauranteurs.

Just like the chicken before, the eggs were from their own farm. They sell the eggs to those who want to bring some back to Shanghai. My colleague from Beijing bought some too. Yes, eggs that tasted like eggs.

Anything deep fried can only taste good. This was something that didn’t appear in the menu last year. The lotus roots were sliced and stuffed with minced pork, coated with flour and deep-fried. Just a simple Mommy’s dish as my mom would do at home in Singapore. Yummy.

The perfect dish for a cold autumn night. Mutton has a lot of goodness and the least amount of fats compared to other red meat. The red sauce 红烧 was perfect with rice, but we still had 5 courses to go, therefore I shall resist.

River mussels have been cultivated for years for their pearl-producing functions. But some larger ones have been harvested as a delicacy. These are not your usual sized mussels but huge bivalves that are sliced and then cooked in a stew with tofu. The mussels infused a deliciousness that only shellfish can, and it can be cooked in a stew for quick some time without turning into rubber.

Called 水芹 in Chinese, the water celery has the texture of kang kong with the taste of celery. Stir-fry with the same mussels used for the tofu dish, it is a delightful vegetable dish.

As the owner was afraid that we did not have enough vegetables, he asked the kitchen to stir-fry some local lettuce. Very crunchy and fresh.

And then the main attractions of the evening was served around course #5.

First up, steamed hairy crabs. Everyone got a pair of male and female crabs. The male crab was about 600-650g in size, and we can rarely get this size in China, not to say in Singapore. The female crab was around 450g, also very rarely available.

Then we were served the drunken crabs that were cooked and then marinated/soaked in yellow wine. Every one of the crab was steeped in wine but it was not as good as the one we had last year. You can taste the difference as these were soaked for less than a day.

This place has become our annual pilgrimage for hairy crabs. This year, it was packed and the small staff that made up of the boss’ family (including his son-in-law) and some helpers was scrambling around the place. In the end they forgotten our main courses of wantons and noodles. Anyway, there was plenty of food so nobody cared. I as just glad that we had the chance to eat it in this extraordinary year.