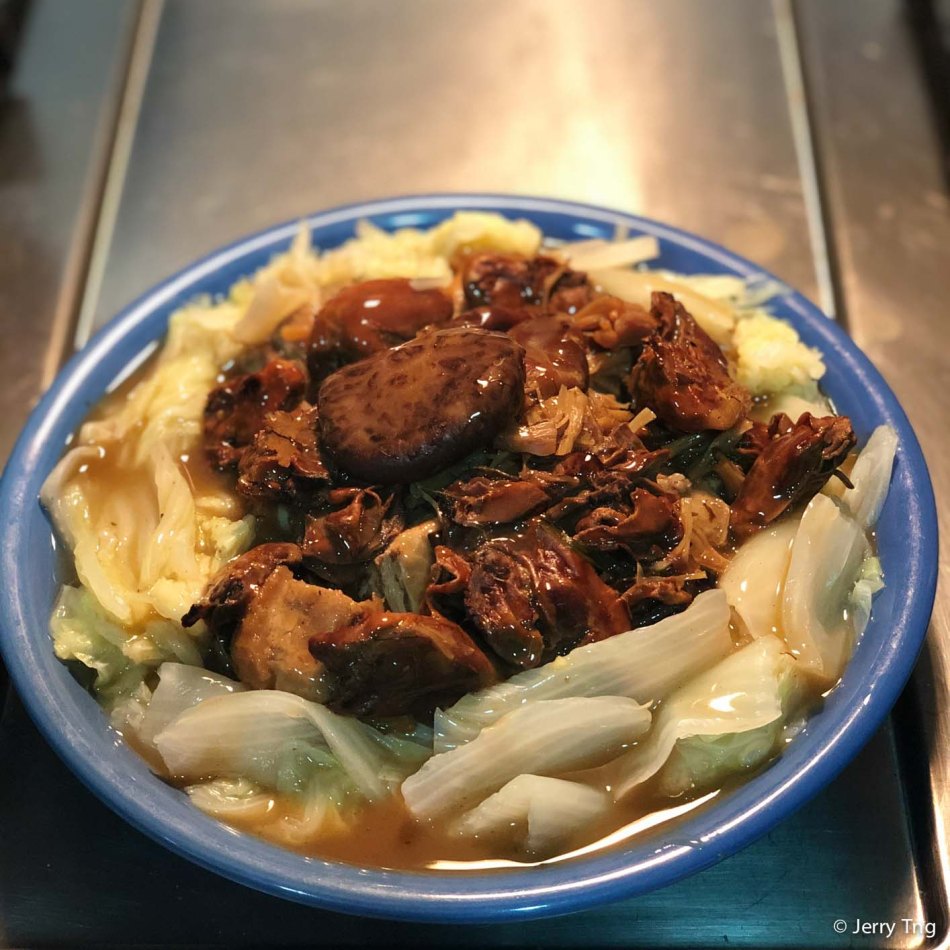 Every Chinese New Year, we have to say something happy and prosperous. And when it comes to food, they have to be auspicious sounding too. Enter the dried Japanese oyster 蠔豉 and black moss 髮菜, in Mandarin and Cantonese they sounded like 【好市發財】”Prosperous Economy”. So how do we prepare these seemingly uninteresting ingredients?

That’s the official name of the dish. Some may replace the roast pork with sea cucumber. It’s really personal preference, but roast pork adds a bit of smokiness into the dish. This is enough for around 4 persons.

Ingredients for preparing the Black Moss

Adjust the sugar and salt accordingly as most commercial off-the-shelf chicken stock would already contain a large amount of sugar and salt. So always do a taste check before you add.

Even better, prepare your own chicken stock.

2/ Rinse the black moss in several changes of water, removing as much of the impurities as possible. Squeeze dry the black moss. There will be fine sand at the bottom of the bowl.

3/ Season the black moss with salt, sugar, wine, chicken stock and oil in a small steamer bowl. You may adjust the amount based on how salty or sweet you want. Use just enough stock so as not to make the moss soggy.

4/ Cover with aluminium foil and steam for 30 min. Set aside the steamed black moss.

Ingredients for preparing the dried oysters

Most of the drying process of oysters would have saltiness that occur naturally. Unless you have soaked the oysters to death, you would not be needing oyster sauce, salt and sugar. But a little sou sauce would add a different plant based savouriness to the whole dish. Always test the taste before adding the next condiment.

You would need to prepare all the dried goods like dried oysters, dried shiitake mushrooms and dried scallops prior to use.

1/  Soak the dried oysters in cold water for 10 minutes or more until they are softer, then rub gently with your fingers to get rid of dirt and sand. Remove and discard the hard muscles. Rinse well with water, drain and dry thoroughly with a clean towel.

3/ Steam the washed dried scallops until soft. Shred and leave for later use

4/ Wash and soak the dried mushrooms until soft and plump. Take out from the soaking liquid and wash the hydrated mushrooms. Leave aside for later use.

1/ Heat up a heavy, flat-bottomed frying pan, add 1 tbsp oil, and when hot, fry the ginger and spring onion until fragrant. Now sear the dried oysters in this oil until golden brown.

2/ Sizzle in the two types of wine（Shaoxing and rose wine, then splash in the chicken stock and water. Transfer the oysters and sauce into a braising pan. If you use a claypot, just proceed to the next step.

3/ Add the shredded dry scallop, and add oyster sauce, dark soya sauce, sugar and salt to taste. Bring to a boil, lower the heat to a fast simmer, covered, for 1 hour, replenish with water if necessary.

4/ Add the roast belly pork pieces, mushrooms and continue to braise with the oyster for 30 minutes; add more liquid if necessary, make sure there remains 1 cup of liquid at the end of cooking. Drain the sauce and set aside.

5/ Arrange oysters at the bottom of a deep bowl, then a layer of roast pork, a layer of mushrooms and finally cover with dark moss. Pour the drained sauce into the bowl and steam for 20 minutes.

6/ After the oysters are soft, drain the sauce from the steamed bowl into a wok. Bring the sauce to boil and thicken with cornstarch mixture. Sizzle in sesame oil.

7/ Place a plate over the bowl and invert the oysters, mushrooms etc. onto the plate. Be sure to hold the plate and bowl firmly together. Lift and remove the bowl.

8/ Pour the sauce over it. You may serve it over a bed of blanched Chinese lettuce or steamed broccoli.