Pappas just feels like a steakhouse should: the dining room was dim enough to warrant a penlight, there’s enough leather to stop a cattle drive, the piano player was tinkling along merrily, and the fire was crackling in the fireplace (even though it was near 40˚C on our visit).

Open grill to eyes of beholder 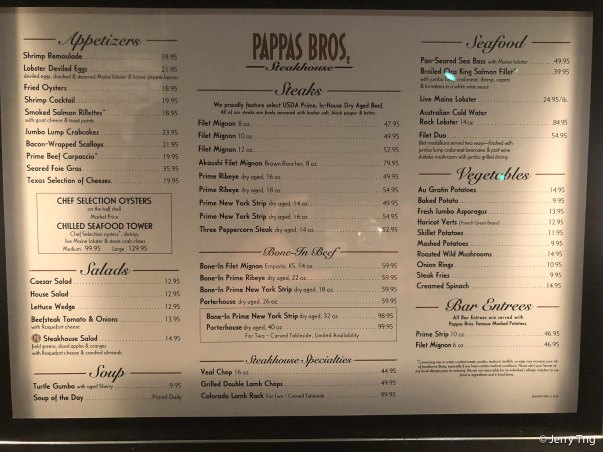 Old school menu in a glass showcase at the door

The dining room is unapologetically old-school, too, with efficient, knowledgeable servers in shirtsleeves and black vests, tables dressed in white linens and flattering lighting.

The kitchen’s location is at once functional as it is decorative. Diners in the main dining room all have a view of the kitchen, which takes on the the quality of a living, breathing work of art. As the backdrop for the overall space, it casts this soft, glowing light over the entire room.

Although a few concessions have been made to modern tastes (sea bass, seared foie gras), Pappas Bros.’ menu could easily be mistaken for a 50-year-old document — until you look at the prices, of course.

And almost hidden away in the far back section, is what Pappas calls “the best part of the restaurant,” a large banquet space, the wine cellar, and a glass-enclosed, “working” private wine room available for intimate private parties (where we were seated).

Gorgeously marbled, thick-cut New York strips, imperial rib-eyes, chunky filets, majestic porterhouses: Behold the display case at Pappas Bros. Steakhouse. Lately those cuts have been joined by a tomahawk rib-eye, an important-looking steak on a dramatically long bone. Something tells you you’re in for something special.

There’s not a lot to get excited about in terms of starters. There’s a steakhouse staple  shrimp cocktail and a boilerplate jumbo lump crab cakes. Or go crazy with bacon-wrapped scallops – giant scallops pan grilled with crispy bacon wrapped around it for salt and flavour.

And then there’s the luxurious lobster deviled eggs with plenty of sweet lobster meat and surprises from honey pepper bacon bits.

I was rather intrigued by this choice of soup. Usually in a steakhouse, you get your cream of mushroom or lobster bisque. But this being the South, you get a gumbo, and turtle gumbo for that matter. Many at the same table squirmed but this is something I grew up with, and here’s another variation that I have not tried.

Gumbo is a stew popular in the U.S. state of Louisiana, and is the official state cuisine. Gumbo consists primarily of a strongly-flavoured stock, meat or shellfish, a thickener, and what Louisianians call the “Holy Trinity” of vegetables, namely celery, bell peppers, and onions. And in this case, the meat is turtle.

It was a good gumbo, very generous with the amount of turtle. If you do not tell anyone else, it would be just another bowl of gumbo with really boney chicken.

Rise and Fall of Turtle Soup in America

This noble stew was served at presidential inaugurations, on the first transcontinental trains and in crowded boardinghouses across the growing country. It was President Taft’s favorite food, and given that the White House had to custom-build a bathtub to accommodate his girth, you’ve got to respect the man’s opinion.

But when did Americans begin eating this unlikely delicacy, and why did they stop? Green snapping turtles were abundant in the first colonies, and early settlers ate their fill of the meat. Turtle eggs appeared on Plymouth Colony dinner tables. Turtle soup in some form probably made the menu at the first Thanksgiving, albeit without the sherry and tomatoes the soup would later feature. By the Revolutionary War, turtle soup figured prominently on menus and in cookbooks across the country.

A large snapping turtle is said to contain seven distinct types of meat, each reminiscent of pork, chicken, beef, shrimp, veal, fish or goat. (Those less enamored of the protein might describe its flavor as muddy, dirty, mushy and chewy, however.) Recipes from the 1800s provide detailed instructions for cleaning turtles (general consensus seemed to be to cut off the head first, then go for the innards and flippers) and also give cooks the freedom to get their turtle meat from cans.

In the end, turtle soup became the victim of its own overwhelming popularity. It migrated from presidential dinners down to railway dining cars, and finally to the red and white Campbell’s can in the 1920s. By World War II, harried cooks had long tired of dressing their own turtles, and cheaper and tastier canned options to turtle became available. Newfangled convenience products like TV dinners and Spam were the final strikes against the increasingly unfashionable turtle soup, and by the 1960s it had gone the way of pepper pot, served only in certain regions of America. 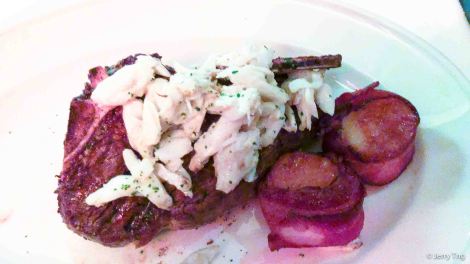 A waiter told our table that the 26-ounce porterhouse dry-aged is a Pappas Bros. signature cut. I went for it, and it was the evening’s runaway hit. The strip side had what I can only describe as amplitude, a generosity of flavor and mouth feel, and the filet side was terrifically tender.

As with the rest of the menu, the more classic sides are best — a naked steak fries, creamed spinach topped with panko, a gloppy au gratin potatoes; “wild” mushrooms weren’t wild at all, just some salty criminis and shiitakes.

With hands on our stomachs, we watched the towering dessert cart roll to another table and decided to give it a miss.

A box of truffles sent us home with sweet dreams—not to mention an appreciation for all things old school.