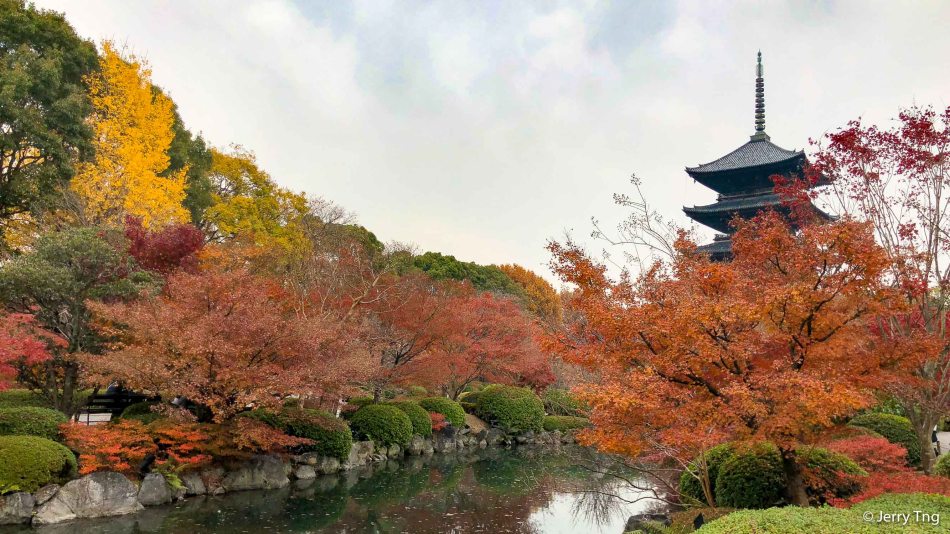 When you come to Kyoto, one of the must-do is to visit the many ancient temples in Kyoto. Besides the renowned Kiyomizu, Kinkaku-ji, Inari Temple, the other world renowned temple to visits Toji Temple.

Toji Temple (東寺, Tōji), literally “East Temple”, was founded at the beginning of the Heian Period just after the capital was moved to Kyoto in the late 700s. The large temple, together with its now defunct sister temple Saiji (“West Temple”), flanked the south entrance to the city and served as the capital’s guardian temples. Toji Temple is one of Kyoto’s many UNESCO world heritage sites.

The Kondo Hall, one of Toji’s original structures, is the temple’s main hall and largest building. Destroyed by a large fire in 1486, the building was reconstructed in the early Edo Period in a contemporary architecture style.

It houses Toji’s main object of worship, a large wooden statue of the Yakushi Buddha, flanked by his two attendants, the Nikko and Gakko Bodhisattvas.

Just next door stands the Kodo Hall, which was added in 825 by Kobo Daishi and served as the temple’s lecture hall. It too burned down in the 1486 fire, and was subsequently rebuilt in its original architectural style. The Kodo Hall houses 19 statues imported by Kobo Daishi from China, which are arranged according to a mandala with Dainichi Buddha (Vairocana) at the center, surrounded by buddhas, bodhisattvas and the fearful and guardian kings.

Across from the Kondo and Kodo stands Toji’s five storied pagoda (五重塔), which was originally erected by Kobo Daishi in 826. It stands 57 meters tall, making it the tallest wooden pagoda in Japan, and has become a symbol of both the temple and Kyoto as it can be seen from many places across the city.

The ground floor of the pagoda is irregularly opened to the public and houses four smaller Buddha statues.

To the west, outside of the paid area stands the Miedo Hall (Founder’s Hall) with a statue of Kobo Daishi.

The grounds feature a garden and pond, in which turtles and koi swim. The grounds also house an academically rigorous private school, Rakunan, from which many students are sent to elite universities.

Definitely one of the must-see in Kyoto, especially during autumn. The autumn leaves are spectacular in the garden ground, and extremely beautiful no matter what your level of photography skill is. It makes really instagrammable photos.

(Most of the text plagiarised from japan-guide.com, a wonderful guide to Japan from an outsider who has stayed in Japan for a long time. I use this site for a lot of my travel research.)