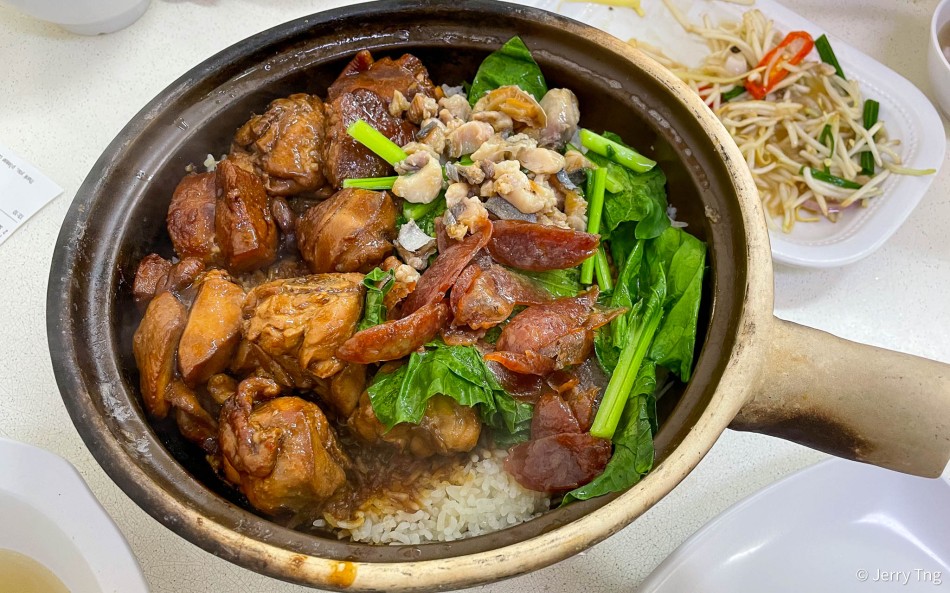 There are few good eats in the north of Singapore. And Woodlands as a frontier town, many would just cross the Causeway over to Johore Bahru for a wider variety of delicious foods. Until now, we only have a few that come to this part to open shop. One was the Sembawang White Beehoon, and there other is Sembawang Traditional Claypot Rice.

Sembawang Traditional Claypot Rice is located in the laidback neighbourhood of Sembawang where the old Sembawang Shopping Centre was. It occupies a spartan shophouse all decked in white washed walls and ceiling with matching white tiles.

Claypot rice must have these condiments – a bottle of dark and semi sweet soy sauce, sambal belachan and chopped chilli.

A childhood adage went like this, “those with no teeth eat beansprouts.” This was one of my favourite vegetable since I was a child, and the best pairing of this bland, crunchy green bean sprouts is the salt and umami-laden salted fish. They had used salted mackerels, but I would prefer that they used the salted croaker which is flaky and more flavourful.

Most claypot rice stores would also sell double-boiled soup, but here they have simple tzechar so they don’t offer double-boiled soup. We ordered a simple seafood soup, but regretted the poorly made soup. Too much ginger and made with frozen seafood that had been boiled to death, we should have just left it alone.

The star of the meal arrived after 30 mins from placing the order. A perfect balance of chicken, Chinese sausage, bakchoy and salted fish, the Sembawang’s version of claypot rice is a beautiful when presented. Everything has its place on the pot. I always order an extra portion of salted fish for that salty umami that is so important in a good claypot rice.

Many would leave the oyster sauce marinated chicken in the claypot, but I like to take them out so that I can put in a liberal amount of dark soy sauce into the rice and yet not make the chicken over salty. Also it is difficult to mix the rice properly with chunks of chicken in it. What I like here is that the chicken is still tender and moist, unlike the lesser stores where the chicken were all stiff and overcooked.

Sembawang’s claypot rice had a rich flavour and the taste was further enhanced by the thick black sauce which give it the savoury and little sweet taste. The amount of soy sauce is up to one but I like to put a little more than usual so that it would flavour the bottom burnt bits of the rice. Then it is skill to mix the sauce thoroughly so that you would get uneven taste with each mouthful.

There’s the burnt rice at the bottom of the claypot, and for the traditionalists this is the sign of a good pot of claypot rice. We are all used to the modern rice cooker which makes perfect rice every time as long as you put in the rice ratio of rice and water. You cannot avoid the burnt rice in claypot as it is directly exposed to the fire. They give the claypot rice its distinctive smoky flavour and crackling texture.

It was a good version of the dish but I would not say that it was the best claypot rice we had tried in Singapore. I prefer the one in Golden Mile food centre, but this is still worth the wait. Just skip the rest of the tzechar items.