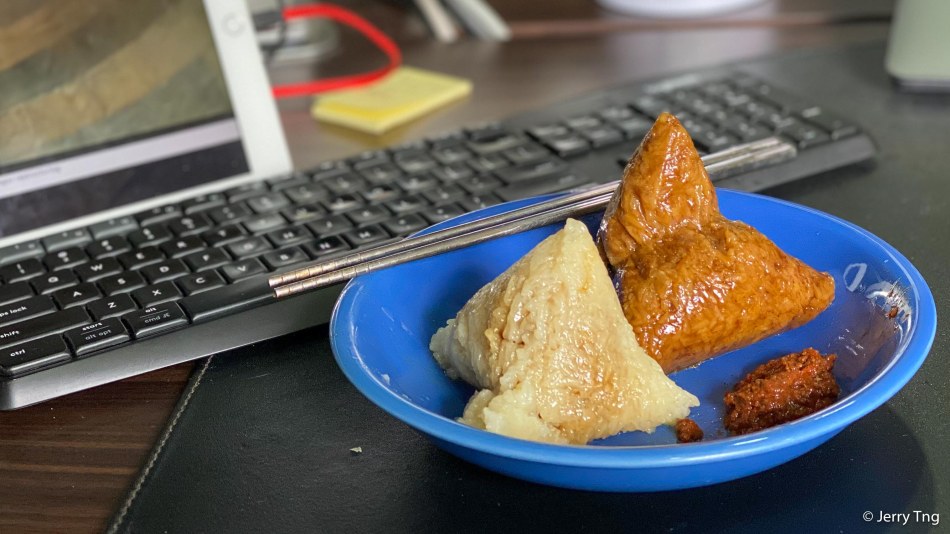 The name Kim Choo will invoke an image of a Nonya bibik wearing her lacy kebaya scolding her daughter-in-laws on how badly the food has turned out because she can do it better, and her son deserves the best. How did it become associated with Bak Chang? How did bak chang come to Joo Chiat?

Every boy/girl of Chinese descent would have heard this story of the patriotic poet/statesman Qu Yuan 屈原, and for some of us suffered the pain of memorising his famous poem “The Lament” 「离骚」 . To cut the long story short, he was slandered by his political opponents, and cold-storage by the King of Chu, after he warned the mighty State of Chu of the impending dangers of the weak State of Qin. Fast forward and Chu’s capital was captured by the invading army of Qin. In despair and disappointment, he committed suicide by wading into the River Miluo 汨罗江  carrying a heavy stone. The countryman of Chu found out what happened decided to wrap rice with leaves into a dumpling and threw them into the river in hope that the fish will not eat Qu’s body. The dumpling became bak chang and the action of rolling the boats in the river became dragon boat races, and the festival was known to the West as Dragon Boat Festival.

Battle of the Bak Changs

OK, we don’t really care about the origin of festival but what it did come with is delicious bak chang 肉粽. For most of us growing up around Katong, we are familiar with Kim Choo Kueh Chang along East Coast Road, near the junction of Joo Chiat Road and East Coast Road. It is especially memorable because my dad used to sell Teochew fish ball noodles at the corner coffee shop in the 50s.

Kim Choo 金珠 is a very common Chinese name among girls because literally it means “golden pearl” and every little girl is Daddy’s golden pearl. Grandma Kim Choo was a Peranakan lady living in Joo Chiat, the beating heartland of the Peranakan soul in Singapore. And she made a really good Nyonya chang, a variation of the savoury bak chang except that it used a sweet and spicy filling. End of story.

The Original Kim Choo since 1945

And Grandma Lee Kim Choo setup store many years back along Joo Chiat, not the East Coast Road store we are so familiar with. The store and factory is still there today at 60 Joo Chiat Place. For many years I always thought Kim Choo Kueh Chang was named so because of Grandma Kim Choo sold Nyonya kueh kueh and bak chang. Until they put up the sign that clarify that kueh chang is how Peranakan refers to bak chang. Now I am intrigued – is that so?

Kim Choo was founded by Grandma Kim Choo in 1945 to earn money to raise her young and growing family. She learnt the recipe from her grandma and sold them on the street. Business was good, so she took a risk and borrowed money from a load shark to setup the store at corner of Joo Chiat Place and Everitt Road. It has been with the family since then.

Since I was a kid, I always remembered their mini Nyonya chang. We would buy them for all our overseas friends and relatives when they came to visit us in Singapore.

It was the Circuit Breaker period, or what the rest of world would call lockdown. I was stuck at home and craving for bak chang. I googled “Kim Choo Bak Chang”, and up on the list is “Joo Chiat Kim Choo“. At first, I was surprised that they mention that they are not located at Joo Chiat Road. Warning sign #1. And then they don’t have the famous mini Nyonya chang. Warning sign #2. And the packaging looks suspiciously different. Warning sign #3.

This is definitely not the original Kim Choo of Joo Chiat despite the name “Joo Chiat Kim Choo“. More correctly, it should be called, “Bak Chang in the style of Kim Choo’s”.

When I opened up the kueh, immediately I knew I did not get the real McCoy. The “blue pea” colouring looked artificial and unevenly spread. There were blots of intense blue that would not happen with natural blue pea.

You might ask, even if it’s not the real thing, how’s the taste? Like what the owner of Joo Chiat Kim Choo, Mr Johnson Oh of U-Market Place Enterprise said in a 2013 interview with New Paper, “The customers can buy the dumplings and taste the dumplings themselves and make a decision.” After all, it is the taste that matters.

Mr Oh, you are absolute right, the taste is different. One, the filling wasn’t as generous as the original Kim Choo. Two, the ingredients were actually quite sub-standard, can actually taste like factory made. Thirdly, the Nyonya chang was not wrapped with pandan leave. Seriously I don’t know how much longer can they pretend to be the original Kim Choo, but I must admit that for a casual consumer, one cannot make a difference on the branding as they have a great marketing and web presence, and better distribution network.

The Tale of Two Kim Choos

Back to the title story. To every food feuds in Singapore, there’s always that sibling, the one that sold the business away. This is no different. According to my research, i.e. Google search and an article in the esteemed newspaper The New Paper in 2013, JCKC bought the know-how from “an uncle” of the original Kim Choo’s family and trademarked the JCKC name in 2006. Kim Choo and the dumpling logo were trademarked in 2000. A Chinese saying comes to mind – 手心手背都是肉 (the palm and the back are all part of the hand). I will leave it as that.

But if you want to original Kim Choo, there’s only one since 1945.

For my Western friends, as a trivial, the Dragon Boat Festival is actually called the Duan Wu Festival or “Double-Fifth Festival”. The actual day is the Fifth day of the Fifth Month of the Lunar Calendar (so it’s somewhere in late May – early July), and it’s traditionally the day where the five “venoms” (五毒) wake up. The 5 venoms are snakes, scorpions, centipedes, toads and spiders. So in agricultural China in the past, this day was celebrated by eating food wrapped with 菖蒲 myrtle flag, which is known for its medicinal properties against the poisons of those venoms. And this became the 粽叶 dumpling leaf that we use today, although most of us use bamboo leaf instead. In Japan and certain parts of China, myrtle flag is still used for making rice dumplings.

Just like Christian traditions have been mixed up with Roman and Greek festivals, Chinese festivals have been embellished by tales of patriots and heroes of the past over the 5,000 year old civilisation. Praise the Lord for bak changs!

3 comments on “The tale of two Kim Choos”