Tianzifang was on my bucket list of things to do in Shanghai despite coming here for umpteen times and outstation here for over 3 years. Managed to have a lazy morning in Shanghai, decided to go for a touristy walk around town.

[Facts and history Information from Wikipedia, photos by me :)]

Tianzifang or Tianzi Fang is a touristic arts and crafts enclave that has developed from a renovated traditional residential area in the French Concession area of Shanghai, China. It is now home to boutique shops, bars and restaurants.

Tianzi Fang is largely hidden from the neighbouring streets, as it grew from the inside of the block outward, although there are now shops on Taikang Road itself. Historically Lane #248 was a key entrance that, in order to gain access to the commercially developed area, required walking about 50m through whilst be surrounded by local residents’ life, including bicycles, hanging laundry, etc. until finally emerging in the ‘new’ area.

The neighborhood centres on a block of Shikumen residential development dating from 1933. The shikumen complex was named “Zhicheng Fang”, where “Zhicheng” meant “realisation of ambition” while “Fang” meant “neighbourhood” and was a common suffix for shikumen estates. Today’s Tianzi Fang precinct covers not only the former Zhicheng Fang, but also other adjoining houses, apartments and industrial buildings of various styles.

Located near the eastern end of the Zhaojiabang canal and the southern edge of the Shanghai French Concession, it was in the relatively downmarket part of the Concession. In 1954, the canal was filled in and the former canal basin became a busy transport interchange. Zhicheng Fang remained an ordinary residential neighbourhood until the last quarter of the 20th century, when the cheap rent but convenient location attracted artists to set up studios there.

In 1998, the formerly busy wet market on Taikang Road was moved indoors. In 2001, the precinct was redesignated an artistic and creative quarter, drawing on its former popularity with artists. At the same time, the whole precinct was given the name “Tianzi Fang”, a pun on Tian Zifang, a figure from the Warring States period and often referred to as China’s earliest recorded artist. In 2006 it was slated for demolition to make way for redevelopment. Opposition among local business owners and residents, as well as a famous artist Chen Yifei who had a studio in Tianzifang, in addition to a group submitted a proposal to the local government to preserve the Taikang Road area and its traditional architecture and ambience.

Rezoning of Tianzi Fang into a tourist precinct began in 2005/2006 with nearby art schools and studios, and later small international business owners found out about Tianzi Fang through the local grapevine. Its development began very slowly with local merchants, a New Zealand store, Japanese restaurants, and a tea house setting up in the district. From the beginning of 2007, journalists, visitors and local residents began to visit the area and spread the word about a cosy little lane district that housed some interesting and creative businesses. Additional articles in both local and foreign media such as the New York Times helped increase awareness of this older and unusual community, that stood out among the more modern and commercial shopping areas of Shanghai.

Tianzifang has become a major tourist attraction and has more than 200 diverse small businesses such as cafes, bars, restaurants, art galleries, craft stores, design houses and studios, and even French bistros. It is adjacent to the SML center which is among the largest shopping malls in Shanghai upon completion. It is also near the Shanghai Metro Line 9’s Dapuqiao Station which is immediately to the south.

Despite all the businesses selling trendy craft and some foreign goods, the area does not have the look of having been overly beautified – electricity cables are still strung overhead, and air conditioning units are obvious on the outside of the buildings. The district is distinctly different from Xintiandi, another Shikumen redevelopment in central Shanghai further to the northeast, in that it has managed to preserve its residential feel, adding to its appeal.

Making use of every nook and cranny

Packed with tourists, losing a bit of the charm

Tianzifang is one big place and it takes a while to walk around. However, the best way to appreciate the architecture and history of the place and watch the world go by is to pick a bar facing a street or alley, and chill for the afternoon. You get to see

Walking through Tianzifang, there are many cafes and restaurants vying for your business, together with street foods and snacks. Besides the usual Western fare, like steaks and ribs, pizzeria, burger and wings, there are many exotic Asian cuisine, like Indian, Vietnamese, Thai, etc. One notable absentee was Japanese, I wonder why.

This Tibetan restaurant and bar caught my eye – I have never tried Tibetan, and I would probably not be able to go to Tibet, given my poor heart and the fear of altitude sickness. This would probably be my closest to Tibet.

The place was about as big as a living room, two storeys tall, and decorated with Tibetan motifs – thankas, Tibetan flags and colours, walls nailed with Tibetan beer caps. The waiters were from Tibet, very friendly and shared a lot of snippets of people coming through the bar.

I sat down at the bar, ordered myself a Tibetan beer on tap (it was 38 °C) and the bartender placed a small plate of crackers to nibble with the beer.

Highland barley, Tibetan barley or Himalayan barley is the principal cereal cultivated on the Tibetan Plateau, used mainly to make milk tea, tsampa and alcohol. They made a cracker with the same barley to accompany your Tibetan beer on tap. The cracker is similar to Saqima 沙其馬 – cracked barley is coated with molasses and made into round crackers. I was never a fan of saqima, or any hard sweets like these. So I took only a few. The bartender saw it and came over to chat. We had quite a good chat about Tibet and why this restaurant was called Dorjelam.

According to him, the owners were called Dorje and Lamu. So the couple decided to call their restaurant Dorjelam. However, when I googled what Dorjelam was, it turned out to be a Dharma sect in Tibetan buddhism. China has advanced leaps and bounds in terms of logistics and sending goods from all over the country to all parts of the country,  and you can now get a Tibetan cold one fresh from the tap. However, everyone is still acutely aware who’s the boss and what ideology is allowed and what’s not. 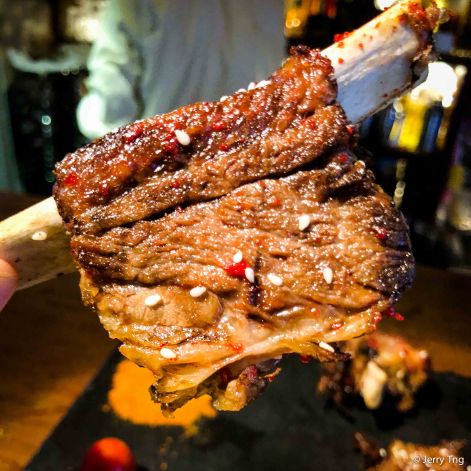 I ordered some lunch. I was to hot to eat anything heavy, so I just ordered a salad and a small portion of ribs. Sticking to the Tibetan theme, I ordered Cordyceps Flower Salad and Grilled Yak Ribs. The salad was fantastic, I finished the entire bowl. It was made from dried cordyceps flower, mixed with sesame oil, salt and pepper, and small mushrooms that looked like enoki but was brown instead of white. I wouldn’t say the same for the yak. The bartender teased me that most people could not stomach yak meat. I can see why – they were dry and gamey, they borrowed all their taste from the spices, in particular the cumin powder 孜然. (PS: I was having trouble digesting yak meat for the next three days after eating it.)

Cordyceps flowers (cordyceps militaris) are not exactly cordyceps (cordyceps sinensis). Cordyceps sinensis 冬蟲夏草 is the parasitic larvae of ghost moths and consists of two parts, a fungal endosclerotium (caterpillar) and stroma. The stroma is the upper fungal part and is dark brown or black, but can be a yellow color when fresh and, longer than the caterpillar itself, usually 4–10 cm. It grows singly from the larval head and is clavate, sublanceolate or fusiform and distinct from the stipe. The stipe is slender, glabrous, and longitudinally furrowed or ridged.

Cordyceps militaris 冬蟲花草 is a fungus growing parasitic on buried larvae and pupae of insects (primarily moths and butterflies); growing alone or gregariously.2-8 cm long; up to about .5 cm wide; club-shaped, with the top wider than the base; the upper portion orange and pimply, the lower portion smooth and orange to pale orange, often curved; narrowing at the base and arising from the buried pupa or larva; flesh pale watery orange, with an outer cortex.

Both fungi look different which means they are made up of different components. Not surprisingly though, the benefits that are oft touted in Traditional Chinese Medicine for sinensis is found in both mushroom species. A study titled, Chemical Composition and Nutritional and Medicinal Value of Fruit Bodies and Submerged Cultured Mycelia of Culinary-Medicinal Higher Basidiomycetes Mushrooms, was published in June 2014. It found that militaries and sinensis of all mushrooms tested in the study possessed the highest amino acids (some of the others that were tested were Lion’s Mane, Turkey Tail, Reishi, Shaggy Ink Cap, Shiitake, and Oyster). However, as over-harvesting of cordyceps has made it an endangered commodity, not to mention really, really expensive, cordyceps flower is a much more sustainable variety for getting cordycepin in the diet.

Yaks are regarded as the treasure and boat in the Tibetan community. These unique species play a significant role in the daily life of Tibetans. The locals rely on the yak milk for cheese and butter that serves as the delectable ingredient for their ubiquitous butter tea and offerings to butter lamps in the monasteries. The number of yaks in Tibet is larger than the population of Tibetan people. The whole Tibet has a population of more than 260 million, while, the number of yaks in the first producing area (Naqu) is more than 300 million. Most of the yaks grow in China’s Qinghai-Tibet Plateau and its surrounding regions which are above 3,000 meters high. Yaks have an aptitude to endure the cold, with a limit of climbing the glacier to 6400 meters.

Yaks have three times more red blood cells than normal cows. This enables them to live without any hurdles on the high elevation grasslands of Tibet. Their long, thick hair insulates their bodies from winter temperatures that can get to -30 degree Celsius or colder. Most yaks are black, explaining why the heat radiation from the bodies can provide an upper hand. However, it is not uncommon to see white or grey ones especially on the grasslands of northern Amdo (modern day Qinghai province). The yak is also good at walking on steep and dangerous roads, climbing snow-capped mountains and going across swamps and rivers. The yak also has an ability to recognize the road. If it meets the marshes, it can make a detour to avoid the trap. Yaks are able to carry heavy loads for long distances. They can carry goods up to 100-200kg and walk for about 15km a day.

Yak meat comprises high protein. It tastes fresh and delicious. Especially in winter, it is a kind of nourishing food. If you go to Tibet, yak meat is the most delicious food that you should not miss. The flexible and smooth hair of this animal is used to make advanced textiles and Tibet wool. The yak’s tail hair can be used to make wigs and false moustache for opera performance. Yak leather is used to make Tibetan high boots and senior leather shoes which are of high quality. These shoes are quite popular with customers from all cities in China. Dried yak dung is the main fuel for herdsmen. They rely on it to keep warm, cook tea and cook meal. Even the bones which are grinded into powder are also very good for fertilizing the farmland.

As I was walking out of the place, managed to catch a familiar sight – Singapore Hainanese Chicken Rice. Maybe I will try it the next time I am there, but maybe not.

0 comments on “Shanghai – A walk in Tianzifang 田子坊”